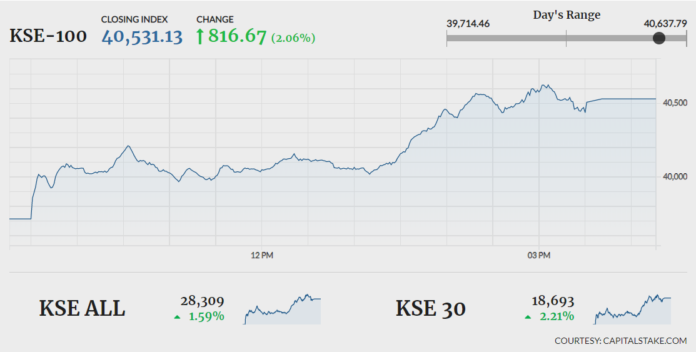 KARACHI: Indices of the Pakistan Stock Exchange (PSX) rallied for the second consecutive session on Wednesday, with the benchmark KSE-100 Index back above the 40,000 mark.

Foreign investors closed the preceding session (on Tuesday) as net sellers, with a net outflow of $1.67 million.

According to latest figures released by the Pakistan Automotive Manufacturers Association (PAMA), passenger car sales declined by 48pc to 10,095 units in January 2020 as compared to 19,353 units in January 2019. However, on a month-on-month basis, car sales witnessed a recovery of 1.08pc.

On the market front, Pakistan International Airlines Corporation Limited (PIAA +4.49pc) reported its financial performance for the second quarter of FY19. The airline reported a loss of Rs37.89 billion for the first half of FY19 as compared to Rs-32.41 billion in the same period last year. On a quarterly basis, it recorded a loss of Rs-26.04 bn for 2QFY19 as compared to Rs-18.72 billion last year.

Meanwhile, Meezan Bank Limited (MEBL +0.53pc) announced its financial results for FY19. The bank’s revenue surged by 94pc to Rs94.27 billion, increasing its gross profit by 65pc YoY. The bank’s earnings per share improved from Rs6.97 in FY18 to Rs11.84.

In a podcast hosted by the State Bank of Pakistan (SBP), the central bank’s governor Jameel Babar stated that Pakistan expects another $8.3 billion...
Read more
- Advertisement -