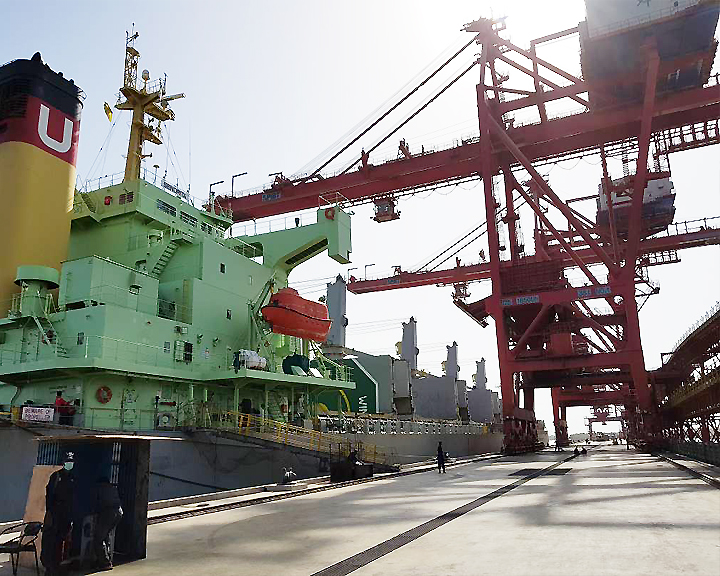 The Pakistan International Bulk Terminal (PIBT) managed to turn its losses into profit, at least according to its recently released positive financial results for the second quarter of the fiscal year ending June 30, 2020. The company posted an earnings per share of Rs0.22, as compared to the loss per share of Rs0.76 reported during the same period last year.

Similarly, its gross profit grew by a substantial 148%, from Rs338 million last year to a gain of Rs837 million this year. The company’s sales for the second quarter of this year stood at Rs2.15 billion, which was higher than analysts’ expectations.

“This result is above our expectations, mainly due to the higher than estimated realized tariff,” said Syed Noman Ahmed, research analyst at Insight Securities, a securities brokerage firm, in a note issued to clients on February 14.

“We believe this could be due to higher realized tariff, as compared to our estimation of $6.5 per ton. As a result gross margins increased to 33.3% in the second quarter of fiscal 2020 from 29.1% reported in the first quarter of fiscal 2020, while coal handling remained at 2.2 million tons,” said Ahmed.

PIBT is a bulk terminal that handles goods that are transported unpackaged in bulk, such as coal and certain types of cement, which are loaded directly into the cargo hold of ships, without any containers or packaging of any kind. Bulk terminals require different equipment to move goods onto and off ships compared to regular container terminals.

A terminal like PBIT makes its money by charging exporters and importers money on a per ton basis for the cargo it handles in the loading and unloading from ships that dock at the terminal. PIBT is currently charging $6.5 per ton and $5.5 per ton for coal and clinker handling respectively. According to Ahmed, the tariff can be further broken down into $6 for handling, and $0.5 for storage. The higher tariff can be attributed to recent truck strikes in January 2020 that lasted at least a week.

The higher profitability this year did lead to more money flowing to the Workers Welfare Fund, and Worker’s Profits Profitability Fund. While ultimately better for workers, this did dilute any positive impact that the appreciation of the rupee during the second quarter might have passed on, according to Ahmed.

The relative success of PIBT is due to a robust demand for coal from the power and cement sector, in addition to relative stability returning to the exchange rate between the rupee and the US dollar. PIBT represents a play on Pakistan increasingly relying on imported coal for its energy needs, as well as the ability of the country’s cement sector – particularly producers in the southern region – to continue exporting their products to the Middle East and Africa.

In the near future, Pakistan Railways is likely to construct a railway track to tie PIBT’s terminal with the railway network, subject to the Planning Commission’s approval. Once that railway line is completed, the port terminal will be able to serve even more coal-fired power plants than it currently serves.

Coal has significantly lower energy density than oil. That means that, per unit of volume, coal releases much less energy than oil. As a result, it can be too expensive from an energy cost perspective to transport coal by truck over long distances, such as that from the port to power plants further up in the northern parts of the country.

The only efficient way to transport coal over land is by rail. That is why the introduction of the railway line leading up to the bulk terminal would be a critical improvement in the nation’s energy production infrastructure.

However, critics point out that, by adopting coal-fired power plants at a time when the country is beginning to feel significant negative impact from global climate change, the government is only adding to the country’s physical and economic vulnerability to the devastating effects of climate change, which are likely to hit Pakistan worse than most other countries in the world.

In addition to handling the imports of coal, PIBT also handles the export of cement from plants located mainly in Karachi, Hub, and Port Qasim. Pakistan has significant surplus capacity to produce cement and has been a net exporter for much of the past two decades. Increases in construction activity in both the Middle East and Africa are likely to cause a boost in the use of the bulk terminal to export cement from Pakistan to those regions.

The terminal has been part of a publicly listed company since before it even began operations, and raised part of the equity to finance the terminal’s construction from the proceeds of its initial public offering.