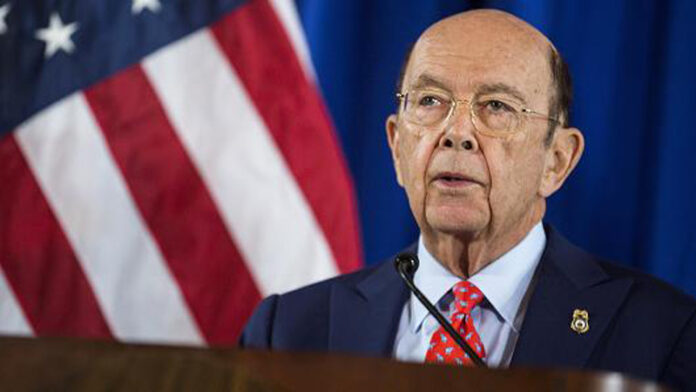 The visit by a senior US official follows the recent signing of $3 billion worth defence deal between the US and India during President Trump’s visit to New Delhi.

According to the officials of the Ministry of Commerce (MoC), the homework for the US Commerce Secretary’s visit has been completed.

During a meeting of the Senate’s Standing Committee on Commerce on Tuesday, Additional Secretary Commerce Javed Akbar informed that various options to enhance bilateral trade would be discussed during Wednesday’s meeting.

According to the MoC, Pakistan would ask the US to convene the meeting of the Trade and Investment Framework Agreement (TIFA) Council to move forward seriously on a number of issues.

“Although, like other countries, there is already a GSP plus facility for Pakistan in the US, but new steps could be taken for getting maximum benefit of the trade preferential facility,” said the officials.

An official from the MoC said the ministry was trying to opt the model of joint ventures on the pattern of Egypt and some African countries to enhance trade ties with biggest economies like the US.

Similar options would be discussed during the scheduled meetings with the senior US official, he added.

According to the ministry’s officials, Ross is accompanying President Donald Trump during his visit to India and he would fly to Pakistan tomorrow for his few hours stay.

According to sources, the last meeting of TIFA was held in May 2019 in which both sides had discussed ways to improve access to products, such as agricultural goods and medicines, in each other’s markets.

Pakistan had been keen to explore potential trade concessions as it could import more US cotton in return for preferential US market access for its apparel exports, they added.

A Preferential Trade Agreement (FTA) could be a long-term goal because of complexity involved in the process, sources further said, and added that the TIFA framework provided an institutional mechanism to carry forward those discussions and come up with new ideas.