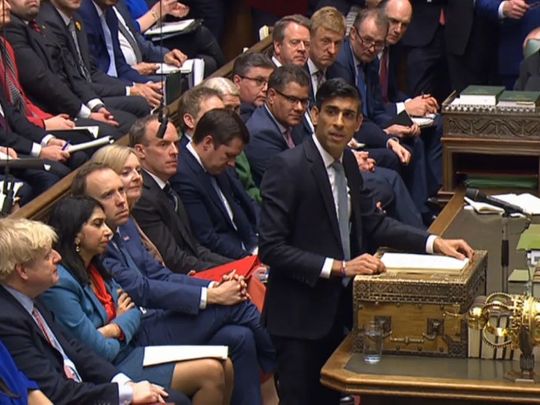 LONDON: Britain launched a 30 billion-pound economic stimulus plan just hours after the Bank of England slashed interest rates, a double-barrelled package aimed at warding off the risk of a coronavirus recession.

Prime Minister Boris Johnson’s new finance minister, Rishi Sunak, said the economy faced a “significant impact” from the spread of the virus, even if it was likely to be temporary.

“Up to a fifth of the working age population could need to be off work at any one time. And business supply chains are being disrupted around the globe,” Sunak said in an annual budget speech to parliament on Wednesday.

“I will do whatever it takes to support the economy.”

Sunak, who has only been in the job for a month, announced a package of measures to help companies facing a cash-flow crunch, including a year-long suspension of a property tax paid by smaller firms.

He also said companies and self-employed people would be able to defer tax payments and he relaxed sick pay qualification rules for workers and people on benefits.

Britain’s health system and other public services would receive an extra 5 billion pounds to help counter the spread of coronavirus.

Johnson had hoped the first tax-and-spending plan of his new government would showcase his plans to direct investment towards poorer regions, where voters helped him to a big election victory in December.

But with medical officials warning of an expected jump in coronavirus cases in the coming weeks, Sunak had to fund new spending priorities.

A jump in public investment over the next five years, to what Sunak says are levels not seen since 1955, represents a turning point for the world’s fifth-biggest economy after a decade of austerity to narrow its budget deficit.

Against a backdrop of plunging stock markets worldwide and signs of a slowdown appearing in Britain’s economy, the Bank of England cut its key rate by half a percentage point to 0.25%, echoing last week’s emergency move by the U.S. Federal Reserve.

The BoE also introduced a new programme for cheap credit and reduced a special capital buffer to give banks more room to lend.

He said the Bank was coordinating with the government to have “maximum impact”.

Britain’s economy unexpectedly flat-lined in January even before the impact of the coronavirus kicked in, according to official data published on Wednesday.

Sunak said he would be able to meet the fiscal rules set by his predecessor Sajid Javid although the rush to come up with measures to fight coronavirus meant the full stimulus cost was not yet included in borrowing forecasts.

Britain’s independent budget forecasters lowered their forecasts for economic growth this year and that estimate does not yet include an updated estimate for the impact of the virus.

But Sunak said growth over the next two years would be 0.5 percentage points higher than it would have been without his stimulus plan.