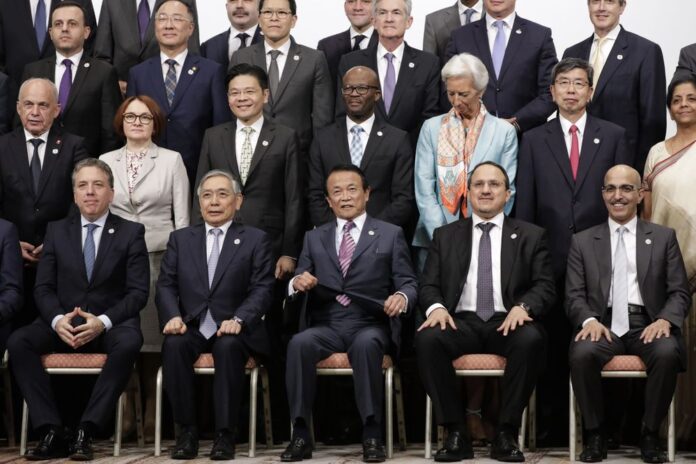 Australia and South Korea on Sunday called for meetings of leaders and finance chiefs from the world’s top industrial and emerging nations as the coronavirus outbreak triggers panic on global markets.

The moves suggest a new urgency among government leaders to tackle the spreading virus that threatens to tip the world economy into its first recession since the financial crisis.

Australia Prime Minister Scott Morrison said he supported a proposal by India Prime Minister Narendra Modi to organize a link-up between G-20 leaders. He also held a call with UK counterpart Boris Johnson and both agreed that finance chiefs need to meet too.

“The Prime Minister (Boris Johnson) and I agreed last night that an even more urgent meeting that would be needed would be a further meeting of the G-20 finance ministers and central bank governors,” Morrison told reporters in Sydney.

Citing market volatility, Morrison said the G-20 should coordinate actions similar to ones rolled out during the global financial crisis.

“We’ve seen some highly volatile, quite disruptive activity on our financial markets,” Morrison said. “We want to be assured through our cooperation — as occurred through the GFC among that G-20 group — that we can make sure that there is no further damage or undermining of financial markets and the central bank governors and financial ministers are in best place to do that.”

South Korean President Moon Jae-in proposed to U.S. President Donald Trump to hold a G-20 teleconference summit to discuss how Korea had combated the spread of the novel coronavirus, according to a statement from Moon’s office.

At the proposed meeting, South Korea plans to share information on its “experience on tackling” the nationwide spread of the novel coronavirus, results on clinical tests, as well as discussing response measures of the outbreak on the global economy, according to the statement.

Also Sunday, Japan’s Economy Minister Yasutoshi Nishimura warned the economic hit from the coronavirus could be worse than the financial crisis and called for a strong policy response.

“This may be on a par with the Lehman shock, or even worse,” Nishimura told Fuji Television. “We need measures on the same scale, they should be bold and not limited by what’s been done before.”

Leaders from the Group of Seven have already signaled they would hold a video conference on the coronavirus early next week. Canada’s Justin Trudeau said the members agreed to coordinate their response.

The moves come amid market panic and daily signs the global economy is powering down as countries enforce new restrictions on travel and movement.

A rush by central banks and governments to slash interest rates and unleash more than $130 billion in fiscal stimulus hasn’t been enough to stop the rout.

Trading volatility spiked to levels not seen since the financial crisis in 2008 as the S&P 500 Index’s historic bull run came to an end — the gauge fell the most since 1987 before retracing some of those losses.

Signs of illiquidity also emerged across global credit markets and the $17 trillion US government-bond market, while the dollar staged its biggest jump in 12 years.

The G-20 released an emergency statement on March 7 that echoed one released by the G-7 nations, which ultimately disappointed investors.

“This has been a very fast-moving event,” Morrison said.

The G-20 accounts for about 90pc of the world economy and unites industrial and emerging economies in a way the G-7 doesn’t.

It was first organised as a forum of finance ministers and central bankers with the initial gathering taking place in Berlin in December 1999.

It took the financial crisis for leaders to get involved, with President George W. Bush hosting the first summit in November 2008 as the world economy tumbled into recession.

The following April, leaders reconvened in London, an event now seen as helping end that recession as governments showed a joint commitment to doing so.

In September 2009, leaders agreed at talks in Pittsburgh that the G-20 would replace the G-7 as the main international economic policy forum.