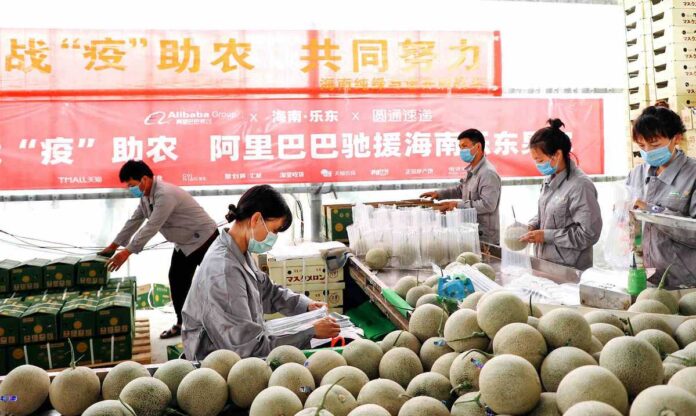 Disruptions to the markets for agricultural products, lack of arms in the fields, poor protection of food workers against the coronavirus: in a rare joint press release, the leaders of the three multilateral organizations responsible for food, health and Commerce, FAO, WHO and WTO warn of the risk of a global food crisis.

While some basic grain exporting countries were tempted to hold back their crops for fear of shortage or to drive prices down, others, more fragile, at the other end of the globalized food chain, could face serious shortages, warn the three organizations.

“Uncertainties linked to food availability may trigger a wave of export restrictions”, itself causing “a shortage on the world market”, underline the Chinese Qu Dongyu, who heads the United Nations Food and Agriculture (FAO), the Ethiopian Tedros Adhanom Ghebreyesus, Director-General of the World Health Organization (WHO) and the Brazilian Roberto Azevedo, Director of the World Trade Organization (WTO).

According to them, it is “important” to ensure trade, “in order to avoid food shortages” especially in the poorest countries.

Perhaps targeted by this warning, Russia, the world’s leading exporter of wheat, whose Minister of Economy and Minister of Agriculture defended earlier this week plans to limit Russian grain exports to 7 million tonnes between April and June, several brokerage firms on the European wheat market told AFP.

On Wednesday, pending government approval of the proposal, Russia decided to sell one million tonnes of wheat from its own reserve stocks on its domestic market to limit the rise in domestic prices, reported Agritel law firm Wednesday morning. Enough to bring the pressure down.

Experts from the FAO, the UN agency responsible for agriculture and food, say that “export restrictions” sometimes lead to famines in other parts of the world.

After the 2007 financial crisis, “a few rice-producing countries like India and Vietnam have placed export restrictions because they were concerned about rising prices, which in turn pushed up world prices, and helped create hunger riots in some developing countries, “said Abby Abbassian, FAO senior economist, interviewed by telephone by AFP in Rome.

The three international organizations are concerned about other factors threatening the global food chain.

The “slowdown in the movement of workers in the agricultural and food industry” is blocking many western farms. With the closing of the borders due to the coronavirus, they all find themselves at the same time dependent on labor from elsewhere: Latin Americans in the United States, Maghrebis to harvest strawberries in Spain, European backpackers in Australia, agricultural workers from Eastern Europe in the asparagus fields in Germany …

Another link causing concern, “delays at borders for containers” of goods, which lead to a “waste of perishable products and an increase in food waste”.

At the height of the coronavirus crisis in China, boats loaded with milk powder containers from Europe could not even be unloaded due to lack of manpower in ports, for example.

In addition, while employees of the emblematic American organic store Whole Foods, owned by Amazon, go on strike for their health in the face of the coronavirus, the three international organizations also worry about the need for “protection” of the personnel of food production or distribution.

Their concern is as much to “minimize the spread of the virus” in this sector as to “maintain the food supply chains”. In times of pandemic, food has become a priority for hundreds of millions of people confined to the world.

“When it comes to protecting the health and well-being of their fellow citizens, countries must ensure that all trade measures do not disrupt the food supply chain,” say FAO chiefs. , WHO and WTO.

“It is in times like these that international cooperation is essential,” they stress.

“We must make sure that our response to the Covid-19 pandemic does not unintentionally create unjustified shortages of essential products and exacerbate hunger and malnutrition,” they conclude.

“We are only at the beginning of this crisis,” judges economist Abby Abassian, according to whom it is not a production crisis, but above all a transport and logistics crisis.

According to him, the situation in India will be decisive for the future. “The harvest begins in a few weeks, the flow of goods must be ensured,” he said.