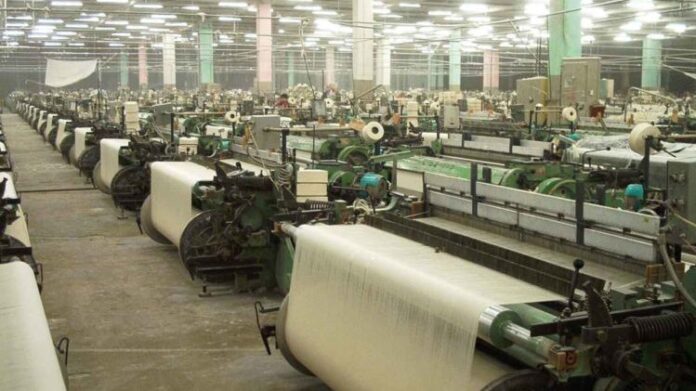 LAHORE: More than 1 million textile workers are set to lose jobs in Pakistan because of declining global orders amid the coronavirus crisis, according to a study.

The recent study was conducted by Mazdoor Akath (Labour Collective). Textile workers are 45 percent of the total industrial workers in Pakistan and 85 percent of them are informal. In this crisis more than 1 million will lose their jobs. This crisis especially has a big toll on women in this sector who had already been undermined and were not visible in the system.

Muhammad Azeem and Dur e Shawar of Mazdoor Akath stated that while ordering a lockdown, the Sindh government through a notification to Employers’ Federation of Pakistan, and giving it effect through Emergency Relief Ordinance on April 8, asked Sindh employers to pay workers for the next three months. However, the reply of the Employers’ Federation of Pakistan (Sindh) was very simple. They said, “businesses are run for profits and it is the fundamental right of the employer to decide about operating the mills and to hire and fire the labour.”

The ordinance was also outrightly rejected by the Site Association of Industry (SAI). Further, employers proposed that workers should be paid from the workers welfare fund for the labourers of the province and the Sindh Employees Social Security Institution and not from their own profits.

“We also note that the federal and Punjab governments only gave verbal statements to assure ‘no lay-offs’ without any legal backing unlike Sindh. Industry in Punjab in fact demanded a postponement of the lockdown, so that they could complete orders and keep the factories running and the profits flowing, despite the dangers posed by the pandemic.”

They stated that at present, despite the non-essential nature of the textile industry, it has won permission to be open. Meanwhile, many units have shut down, many workers have been laid off or fired, and many have only been paid partially.

The study claimed that businesses are using the opportunity to negotiate new terms with the government and drastically restructure their production lines, leaving the future for workers very precarious. This report is about labor lay-offs and closure of factories in the textile and garment industry in Lahore and nearby.

They stated that in Lahore they interviewed workers from almost 30 units and collected stories about their condition. The authors of the study said they also asked workers about their friends working in the textile sector to broaden our canvas of research. In Faisalabad, they said they reached out to a known labour activist in the textile sector and understood the situation through him. The study said that it is important to mention at the outset that due to the domination of brands and global value chains in the textile and garment industry there are multiple layers of contractual arrangements and hiring patterns.

They stated that the effects of the current economic crisis are different at different levels. The GSP+ report presented to the European Union (EU) ) by the Pakistan Workers Federation (PWF), Human Rights Watch report of textile workers, National Trade Union Federation (NTUF)’s research on textile industry in Faisalabad and Karachi, some important work by Pakistan Institute of Labour Education and Research (PILER), and few academic writings, shows us that the overall situations of labour conditions in the textile sector are abysmal.

According to the NTUF report, 80 percent of the factories are not registered. Most of the workers are hired under a contract system without appointment letters. Almost 75 percent of workers engaged in the textile, garment and hosiery industry are in the informal sector of global value chains. These workers also face long working hours, lack of toilet facilities and clean drinking water. The study maintained that women in the garment industry do not have separate canteens, no childcare, maternity leave etc. “There is huge discrimination in salary and promotion for female workers. Only four percent are unionised and 93 percent are receiving less than minimum wage,” the study said.

They added that within this prevalent unjust structure, the Covid-19 crisis hit the textile industry and inflicted a heavy toll on these insecure workers. They claimed that industry owners stood united in not wishing to share any of the costs and burden, but rather started asking relief from the government while insisting on running the factories.

Lay-offs and labour conditions in the textile and garment industry

The report stated that production in the textile and garment industry is not only through value chains, but operates through clusters and networks. Other than supplier contractor arrangement between brands of developed countries and local manufacturer, GVCs in textile has downward links (cotton picking, ginning, weaving, spinning, dyeing, cutting, sewing, finishing), as well as upward links with godown workers, loaders, and retail salespersons.

Therefore, it involves diverse hiring and payment of wages arrangements. The daily wagers which are almost 90 percent of the workforce are usually hired through contractors for certain parts of the process of manufacturing, e.g. stitching. Daily wagers are of two types – one is monthly plus piece rates, and the other is only piece rate.

They stated that the sudden lockdown left contractors and workers in limbo in terms of wages. Presently money for under process jobs is double what is being paid to workers. Contractors have told workers to “wait” so that they can get money from the factory. The study stated that they are also threatening workers not to contact activists but wait for the situation to settle and business to resume.

According to one account of a very senior textile worker, the capitalists or industrialists are united and following uniform policies such as firing workers on probation, paying with 35 percent deductions. Larger companies are particularly harsh whereas smaller groups and brands are more concerned with their labour, he added.

In Lahore generally, from our study, it seems that after the lockdown began, contract workers were paid for the days they worked till March 13 and March 20 and were then told that they would be informed when work would restart, they said.

The study stated that there were no promises for wages for the next month or rehiring. In some cases, assignments and payments of contractors were pending and the sudden closure of business left workers in limbo. In many cases, piece rate payment was stopped. They added that in this situation contractors and workers were not able to either confront or leave the situation. The study also stated that thousands of daily wagers and workers are laid-off by few of the leading textile exporters of the country. “Contractors and workers were offered work for one more week without wages in order to recover pending dues. Workers have been using different tactics to recover wages given that they are in complete precarity and uncertainty.

The study claimed that first they were told to come on Saturday, many were Christians and Easter was the next day, they were not paid and were told to come again. In advance fashion / US group advances were stopped but local pressure compelled management to pay.

Based on the above, the study revealed that the danger for workers extends into the future. Firstly, workers who retain their jobs might be required to work at less than normal wages for next few months including not being paid for many hours of work.

Secondly, they fear that when industry resumes, it might only hire a fraction of the workforce with lower wages and security, with particular effect on women’s employment. They maintained that there will be many compromises on safety, as even normally there are few precautions and no labour inspection. They further mentioned that the intensity of the backlog will fall on workers, who will work without any or proper overtime. The researchers feared that the payment to contractors will be deducted, who in turn will shift this load onto daily wagers.