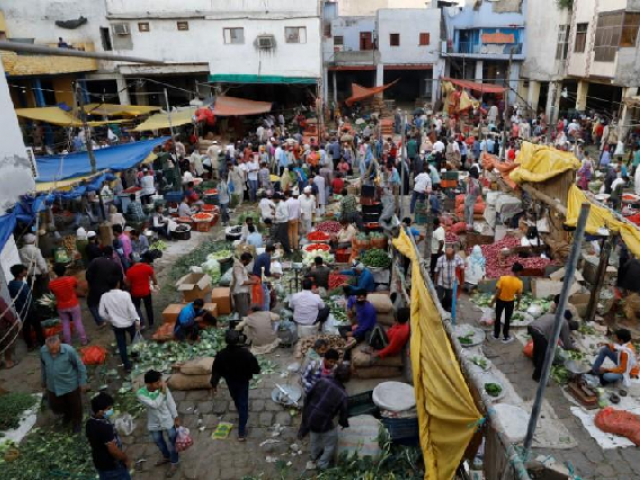 LAHORE: The Punjab government and its administrative institutions could not enforce the standard operating procedures (SOPs) defined to curb the spread of coronavirus, as the citizens of the provincial capital repeatedly thronged to markets without any considering for social distancing and other preventive measures.

Before the government relaxed the lockdown, traders had assured the government that the SOPs defined by them would be strictly followed and only one customer would be allowed into a shop, however, as soon as the restrictions were eased, the ground situation was in direct contrast with the traders’ assurances.

Sources informed Pakistan Today that during a high-level meeting chaired by Punjab Chief Minister Usman Buzdar, this unsatisfactory situation was discussed, prompting the authorities to consider shutting down some markets.

According to the spokesperson of the Primary and Secondary Healthcare Department, 336 new cases emerged in the province in the past 24 hours, taking the total number of cases to 13,561, with 6,699 cases present in Lahore. The spokesperson added that 223 people have already succumbed to the virus.

A cloth merchant in Anarkali Bazaar told this scribe that the shopkeepers cannot control the influx of customers. “It was the government’s responsibility to control overcrowding as these shops were opened after 50 days and the people naturally rushed to buy things,” he said.

“We already suffered a lot of financial losses during the lockdown, so we too are helpless because we cannot stop the customers from coming into our shops,” he added.

He further said that the people who visit shops are responsible for their own safety, not the shopkeepers. “We wear masks and gloves but we cannot force the customers to do the same as 6,000 to 10,000 people visit the markets daily after the relaxation in lockdown,” he added.

Fouzia Saleem, who was out shopping in Ichra Bazaar, did not appear to be afraid of the coronavirus outbreak. “We have been locked down in our homes for such a long time without any recreation and for women, the most common recreation is shopping,” she said, adding that she had been waiting for the markets to reopen for a long time.

Dr Ahmad Hassan, who works at a government hospital, lamented the government’s decision. “Relaxing the lockdown has disturbed the medical community as this decision would result in casing rising rapidly and the situation can get worse,” he said, adding that the government should reimpose the lockdown because “only this approach can help in controlling the outbreak”.

When contacted, Lahore Deputy Commissioner Afzaal Talib said that the district administration of Lahore is working at its best to ensure that precautionary measures are taken in the market. “All assistant commissioners, police and health teams are out in the field for the implementation of the SOPs,” he said.

He also said that on Thursday 215 shops were sealed in different parts of the city for not following the SOPs. “We are taking strict action against those who are violating the SOPs and any shop or market found to be violating them would be sealed immediately,” he added.

It is pertinent to mention here that according to the government’s decision regarding easing restrictions, markets would remain open from Monday to Thursday and would be closed from Friday to Sunday.