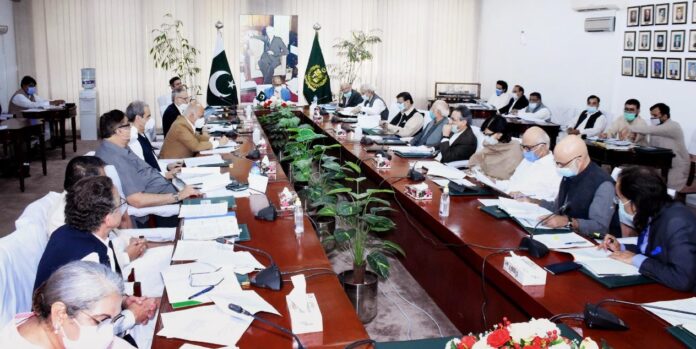 –In order to maintain buffer stock of fertilisers, ECC approves gas supply to Agritech and Fatima Fertiliser at subsidised rates

ISLAMABAD: The Economic Coordination Committee (ECC) on Friday approved Rs29.72 billion for the provision of cash assistance of Rs12,000 per beneficiary to 3.725 million applicants, irrespective of provincial, regional and district quota, under the Ehsas Emergency Cash Programme.

The ECC meeting, which was chaired by Adviser to Prime Minister on Finance and Revenue Dr Abdu Hafeez Shaikh, allowed the Benazir Income Support Programme (BISP) to spend Rs29.72 billion, from its allocated budget of Rs200 billion for 2020-21, on cash transfers to 3.72 million applicants, instructing that any additional requirement for regular operations of BISP would be also provided during 2020-21.

The decision came after the Poverty Alleviation and Social Safety Division informed the ECC that although 3.151 million applicants, who had applied for assistance through SMS, were found eligible under the approved criteria, they could not be provided assistance on account of provincial/district quotas.

The ECC was told that the Punjab government had already agreed to provide assistance to 700,000 of the applicants identified through SMS, leaving 2.451 million eligible applicants who could be provided cash assistance at Rs12,000 (Rs 3000 for four months) at a total cost of Rs29.72 billion.

Meanwhile, the ECC also took up a proposal for policy guidelines with respect to the sale price of RLNG.

The committee was informed that given the ring-fenced nature of RLNG and indigenous gas pricing, the sale of RLNG to domestic gas consumers at weighted average domestic tariff/gas sale price on SNGPL network had resulted into accumulative tariff differential/RLNG revenue shortfall of Rs73.84 billion from July 2018 till April 2020.

It was told that this revenue shortfall had occurred after adjustment of RLNG impact on a cost-neutral basis, whereby the SNGPL sold indigenous gas as RLNG to its consumers and recovered some of the revenue shortfalls whenever the surplus system gas became available.

The ECC was also briefed that the issue of RLNG revenue shortfall had arisen mainly because of the price differential in domestic gas, as 91pc of the domestic gas consumers had been paying an average monthly bill of Rs121, which was many times less than the price of imported RLNG supplied to domestic consumers in the winter months.

The committee considered the proposal and asked the Oil and Gas Regulatory Authority to review it, especially the RLNG revenue shortfall as worked out by the SNGPL, and report back to ECC.

It also decided to further discuss the issue in a small group in order to develop a consensus-based policy decision at the government level so that the creation of a circular debt situation in the RLNG sector could be avoided.

The committee also took up a proposal by the Ministry of Industries and Production which submitted that as per the data furnished by National Fertilizer Development Centre (NFDC), the national inventory for urea fertilizer would be below the buffer stock level of 200,000 metric tonnes in the months of December 2020 to February 2021.

The ECC decided that in order to cover this gap and maintain the buffer stocks at the required level, gas at rate of Rs756 MMBTU be provided to two shutdown plants at SNGPL networks, namely Agritech and Fatima Fertilizer, for three months w.e.f. July-September.

This would involve the GoP’s share at Rs959 million, much less than the revenue spent previously on using these plants to produce the urea fertilizer to cover up the shortage.

The ECC also discussed the issue of quarterly adjustments of K-Electric Limited for the period from July 2016 to March 2019 and affirmed its previous decision of 26th March 2020, whereby recommendations of a committee constituted by ECC in its meeting on 4th March 2020 to settle the issue of quarterly adjustments of the of K-Electric were approved with the instruction that the same would be effective after three months.