Traders protest as Punjab govt imposes lockdown ahead of Eid 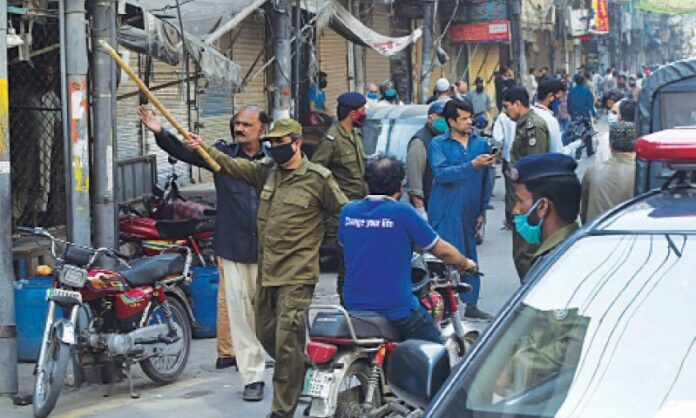 LAHORE: A strict lockdown started across Punjab on Tuesday as police forcibly closed shops amid protests by traders, who called the provincial government’s directive to close businesses till August 5 ‘economic murder’ of the business community.

Lahore’s Anjuman-e-Tajiran General Secretary Naeem Mir said in a press conference that the lockdown is not acceptable and business should be allowed to open till Eid as the business community was implementing standard operating procedures (SOPs) designed to curb the spread of Covid-19.

“The government should make some considerations and immediately reverse its decision,” Mir said. “Markets all over Pakistan, except Punjab, are open. What is the fault of Punjab’s trader community? Traders should leave their homes and open shops.”

Traders in other major cities of Punjab, including Faisalabad, Rawalpindi and Jhang, also protested against the smart lockdown and vowed to open their shops. Faisalabad traders opened shops in surrounding areas of Clock Tower, Rail Bazaar, Makki Market and Gol Bazaar.

On the other hand, police arrested several traders for violating the government’s orders.

The traders kept the shutters of their shops down and were present outside until the customers arrived. Upon their arrival, the shopkeepers would secretly let them in.

Khalid Ameen, a buyer at the Neela Gumbad Bicycle Market, told Pakistan Today that he had bought two bicycles from a shop. “The shops are apparently closed, but the shopkeepers are sitting outside their shops or at some other spots, and when the customer comes, they figure it out, and the shop shutters are secretly opened, and the customer is allowed to enter the shop,” Khalid said.

A shopkeeper, Jawad Mustafa, said that the lockdown before Eid was tantamount to destroying businesses. “Businesses were already in a slump due to the lockdown previously imposed by the government. Now that the situation was improving, the government announced a lockdown again. Expenses have gone up due to Eid. If we don’t do business, how will we meet the expenses?” he said.

Speaking on the occasion, the minister said that relaxation in lockdown before Eidul Azha will bring negative results like Eidul Fitr. The business community should extend its support to the government and implement lockdown.

Raja Basharat said that lockdown has been enforced by the government to ensure safety of the masses as coronavirus is still a threat.

The provincial government on Monday announced that all business and commercial centres in the province will remain closed till August 5.

The notification added there would be a complete ban on sporting tournaments/ matches (indoor and outdoor) except non-contact professional sports without spectators.

Earlier, Prime Minister Imran Khan urged the nation to take preventive measures during Eidul Azha and Muharram, warning that Covid-19 cases may increase if SOPs are not followed.

“I appeal to the whole nation to thank Allah that he has saved us from a big catastrophe,” PM Imran said during his address to the nation. “We have to be careful in Eid and Muharram as coronavirus cases could increase if we are not careful.”

The premier also urged the nation to buy sacrificial animals online and if need be, go to the cattle market while adhering to the preventive SOPs.

“If we are successful in these two months, then we would be able to open other sectors such as tourism and education,” he said. “If were are not careful, then we would be putting the lives of our loved ones especially the elderly in danger.”