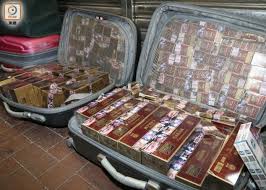 ISLAMABAD: A growth of 143 per cent was recorded in seizures of smuggled goods across the country, Pakistan Customs said in an official statement issued on Thursday.

Pakistan Customs is making all-out efforts to protect the economic frontiers of Pakistan and protect local industry, the statement said. The government has extended anti-smuggling powers to Police, Frontier Corps, Pakistan Rangers and the Maritime Security Agency and has launched a country-wide operation against transportation, storage, and sale of smuggled goods.

- Advertisement -
Facebook
Twitter
Linkedin
WhatsApp
Email
Previous articleTrade with Iran suspended for at least a week
Next articleNDMA, FWO get PM’s nod for unlimited funds to clean up Karachi