90pc workforce for ML-I project to be locally hired, creating employment for 150,000 people 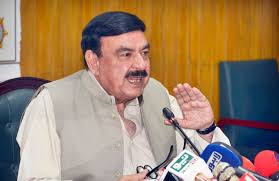 ISLAMABAD: Federal Minister for Railways Sheikh Rasheed said that 90 percent labour and technical staff for Main Line-I (ML-I) project would hired from inside the county, which would provide employment for more than 150,000 people.

He said this while addressing a press conference here on Thursday, adding that the ML-1 was the biggest project of the incumbent government and completion of project was the mission of his life. He said that currently there were about 1,000 crossings on Lahore-Karachi route but with the ML-1 project signal system would be automated and travel time would be reduced. He added that the Railways was also increasing speed of trains from 70/80kph to 180kph.

He also said that the work on ML-1 and Nullah Leh would start this year. He added that the government would give tender to China, which could further subcontract local companies.

The project starting form Karachi and culminating at Peshawar would not only decrease unemployment in the country but would also boost national economy, he said. He informed that the Executive Committee of the National Economic Council (ECNEC) had approved the up-gradation of existing ML-1, 1,780 kilometer, and after completion, the train would run on the upgraded track at the speed of 160 kilometers per hour.

Sheikh Rasheed said the railway track was built in 1861 and due to its dilapidated condition it increased incidents but now the track was going to upgrade that would help mitigate railways mishaps. This project costs $6.80 billion, and it also includes turning the existing one-line into a double-track route to provide safe journey to the railways passengers.

The minister said the track was being upgraded on modern lines that would allow trains to run at the speed of approximately 160 kilometer per hour. The track may also have the capacity to increase more speed in the future.

During the upgrade of the ML-I, the existing track available in good condition would be utilised for the rehabilitation of other branch lines across the country. The entire project would be carried out by the Pakistan Railways engineers in collaboration with Chinese engineers, he maintained.

The ML-I is just a beginning, Pakistan Railways will also upgrade ML-II, ML-III and ML-IV to improve the infrastructure in the country, the minister said. People having land adjacent to track were being allowed to construct eight floor building to encourage private entrepreneurship. He said fencing would be ensured to secure the track and all the level-crossings would be converted into flyover and underpasses besides upgrading signaling system to avoid accidents.