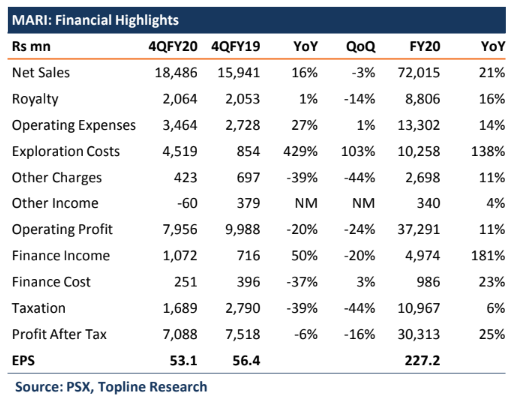 Operating expenses clocked in at Rs3.5 billion ($1.8/bbl), which is broadly same as last quarter’s $1.84/ bbl. Finance income increased by 50 percent YoY due to increase in overall cash position of the company.

During FY20, earnings of the company increased by 25 percent YoY due to rupee depreciation of 17 percent which resulted in higher wellhead prices. Overall, the financial income increased by 72 percent YoY, mainly due to higher interest rates for the period, Insight Research report showed.

During 4Q, despite 50 percent QoQ fall in oil prices and meager decline in gas production from MARI field, revenues witnessed 16 percent increase thanks to 11 percent average currency devaluation. Overall oil and gas production of the company declined by 8 percent YoY and 2 percent YoY respectively during the year.