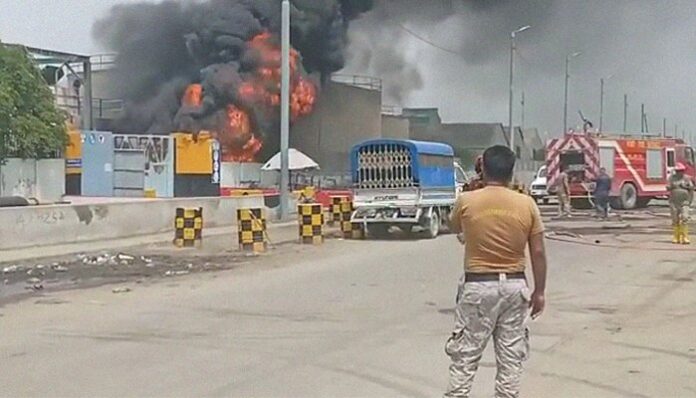 A massive fire erupted at an oil terminal at Karachi’s Keamari locality on Thursday, leaving at least two people dead and interrupting petroleum supply across Pakistan.

According to media reports, bodies of two people who were working at the Keamari oil terminal at the time of the blaze have been recovered and identified by the police. Both individuals were residents of the Kutchi Para neighbourhood.

Rescue officials said at least four others were injured as well.

Following the incident, the All Pakistan Oil Tankers Owners Association (APOTOA) suspended the petroleum supply until the situation improved.

“We have suffered a lot from the fire,” APOTOA Vice Chairperson Shams Shahwani said, adding that the next course of action would be decided after the fire was fully controlled.

Meanwhile, Karachi Port Trust (KPT) Chairperson Rear Admiral Jamil Akhtar, who himself was wounded while onsite to monitor efforts to douse the fire, said there were large oil reserves some 500 yards away.

Speaking exclusively to private media, Akhtar explained that “had there not been an immediate notice [of the blaze], a huge fire could have erupted”.

“The fire affected my hair and face,” he said.

According to Rangers officials, water board hydrants and additional fire brigade vehicles had been called to assist in dousing the flames.

The road leading to Keamari were closed for traffic and vehicles diverted from the ICI Bridge to an alternative route.