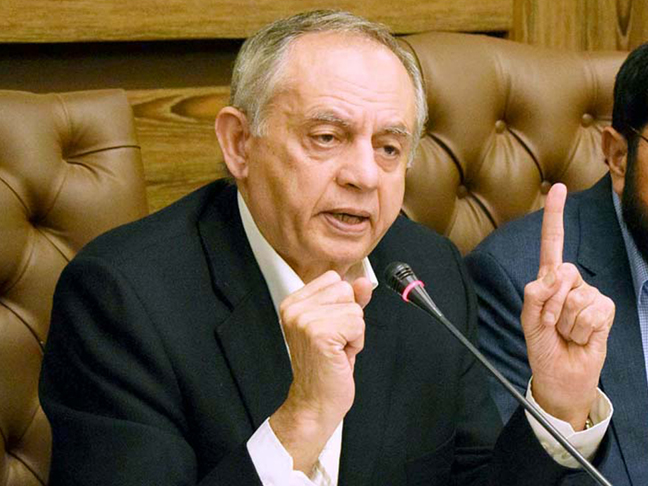 Adviser to the Prime Minister on Commerce and Investment Abdul Razak Dawood has assured the country’s exporters of his all-out support and facilitation.

“We need to shift from low value-added products to high-end manufacturing…our focus should be on the strengthening of the manufacturing sector so that dependence on imports could be averted. Along with exports, Pakistan needs to enhance the cope of its services.”

Dawood informed that the government had abolished import duties on 41pc industrial raw materials, which make more than 1,600 tariff lines.

He said the Ministry of Commerce was working on a three-year plan to rationalise tariff, especially the duties on raw materials. The plan, being finalised in consultation with chambers and associations, would encourage value addition.

“The ministry is also working on making the process of getting refunds easier for the exporters,” he said, adding that the tariffs were now being determined by the commerce ministry and not the Federal Board of Revenue (FBR).

He said that land acquisition for special economic zones had become costly as soon as we announced the development on any site. To counter this issue, we have suggested bringing a lease policy so that the land in SEZs would be available on a lease basis, he added.

Speaking on the occasion, LCCI President Irfan Iqbal Sheikh said that the chamber believes in keeping sound working relations with the government departments, especially the Ministry of Commerce, for the betterment of Pakistan’s economy.

He informed that the retail sector has incurred a lot of costs and efforts on the development of infrastructure for integration with the FBR’s computerized system for real-time reporting.

“However, the benefit of reduced rate of sales tax (from 14pc to 12pc) is being provided to limited sectors (i.e. finished fabric, textile and textile made-ups and leather and artificial leather related products),” he noted, recommending that all the sub-sectors of retail sectors should benefit from the reduced rate of 12pc.

He suggested that no audit should be conducted for at least two years for such retailers who opt for integration under this regime.

He said that the Covid-19 has adversely impacted Pakistan’s economy which was already facing stiff economic challenges including high debt, devaluation, inflation, fiscal deficit and shrinking of GDP. The industrial sector has also been facing negative growth rate since the last couple of years.

Sheikh said the exports hold great importance for Pakistan’s economy as they were the main source of revenue generation, employment creation and maintaining the balance of payments stability.