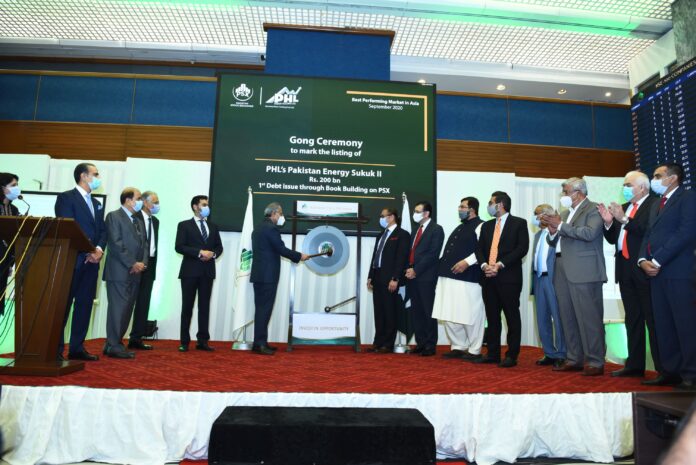 The book-building process, which had been managed by the PSX, had been concluded earlier in the year, on May 19, while the listing of the Sukuk took place on July 28. The book runners were the National Bank of Pakistan (NBP) and Taurus Securities. The gong striking ceremony was held to formally mark the issuance of the PES II at the Exchange.

Dr Abdul Hafeez Shaikh, the Adviser to the Prime Minister on Finance and Revenue, was the chief guest of the event.

Dr Abdul Hafeez Shaikh congratulated the team on bringing the Sukuk Issuance to fruition. “For the first time the government raised Rs200 billion through Sukuk at less than KIBOR rate, through competitive book-building at PSX, saving Rs18 billion over 10 years of debt servicing,” he said.

He also appreciated the strong performance of the Exchange and congratulated PSX on being named the best performing market in Asia. He said it was particularly creditable, considering the recent challenges faced by Pakistan and Karachi.

Farrukh Khan said, “The competitive book building preceding the listing is a watershed event in itself not only for the Stock Exchange and the capital market of the country but also for the economy in general.”

He further added, “It sets a precedent for other debt listings to engage in the state of the art competitive book building managed by the Stock Exchange, which will enable GOP and private companies to raise capital at the most competitive cost, while providing attractive investment opportunities to investors.”

PHL’s Pakistan Energy Sukuk II is a Shariah-compliant debt instrument which was issued through the competitive book building process managed by PSX. At the time, the issue was oversubscribed by 70pc, or by about Rs139 billion, against the target amount of Rs200 billion.

The PHL Sukuk is a debt instrument with 10-year maturity with semi-annual profit payments for investors. It is a 100pc SLR eligible for government-guaranteed security.

According to the PSX, the competitive book building process not only led to more competitive borrowing rates for the government of Pakistan but will also lead to greater liquidity and secondary market trading of the Sukuk.

“The competitive book-building process for PES II helped raise the targeted amount of Rs200 billion at a rate less than the Kibor rate, i.e. Kibor minus 10 basis points. This translates to an annual interest saving of approximately Rs 1.8 billion by the Pakistani government, as compared to the debt servicing on PES I which was earlier issued as a debt security by PHL,” the PSX said.