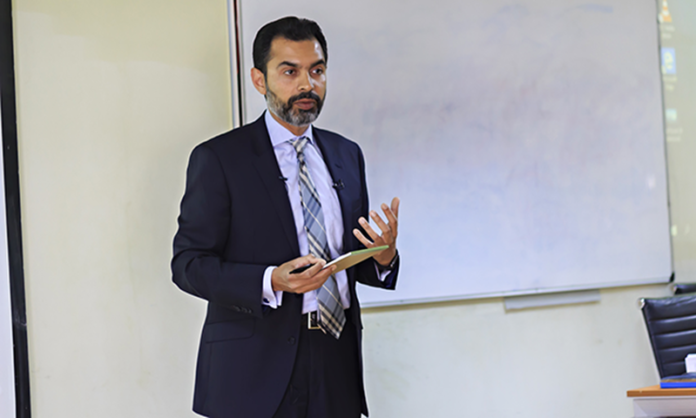 FAISALABAD: As Faisalabad was contributing 20pc to the national economy, the city’s businessmen must fully exploit the corona-related incentive schemes offered by the State Bank of Pakistan to further expedite the process of industrialisation.

This was stated by SBP Governor Dr Reza Baqir during his visit to the Faisalabad Chamber of Commerce & Industry (FCCI), where he briefed the business community about the SBP incentive schemes.

Baqir noted that despite having a huge share in the national economy, the business community belonging to Faisalabad was not benefiting from the SBP schemes.

He said that commercial banks avoid out-of-the-box solutions of the problems but in the corona-like situation, these had become imperative. “We are encouraging the banks to expedite dispute resolution mechanisms so that the negative impact of corona could be controlled and compensated.”

While introducing SBP Deputy Governor Sima Kamil Cheema, he said that the newly appointed official had vast experience in commercial banking and was working on various schemes, including agriculture finance, female entrepreneurship and digitalisation.

“These schemes will give a jump start to the economy, particularly to the SME sector,” he maintained. “The SBP has adopted a holistic approach, which, apart from facilitating the borrowers, intends to discourage the misuse of incentive-based schemes.”

He recalled that when corona started, the policy rate was 13.25pc which was brought down to 7pc within the shortest possible time only to facilitate the business community. Private credit was around Rs6 trillion but due to a cut in the policy rate, borrowers will enjoy a saving of Rs470 billion per annum in terms of cash flow and output.”

Similarly, he said, the banks also deferred the instalments of Rs640 billion, adding that 90pc of the SME sector benefitted from this scheme.

Regarding non-performing loans, he said the loan limit of sick units had been doubled which would give them a benefit of Rs170 billion in markup.

On the Rozgar Scheme, the SBP governor said that it was a foremost duty of the central bank to save the jobs of the private sector employees. Hence, the SBP had launched a refinance scheme to provide loans at 3pc to the employers who would retain their employees during corona lockdown.

“Initially, this scheme was for three months which was later extended to six months. A sum of Rs180 billion had been released under the scheme.”

He also appreciated the efforts of the government to contain the Covid-19, saying that the Temporary Economic Refinance Scheme was launched on the pattern of long-term finance.

The scheme was initially for five export-oriented sectors but later it was opened for all sectors so that they could also contribute their role in the revival of the national economy, he said, adding that this scheme was available from March 30 and hence people must avail it.

The SBP governor said that loans worth Rs5 billion were disbursed through the help desk established at FCCI, which helped secure jobs of more than 50,000 workers.