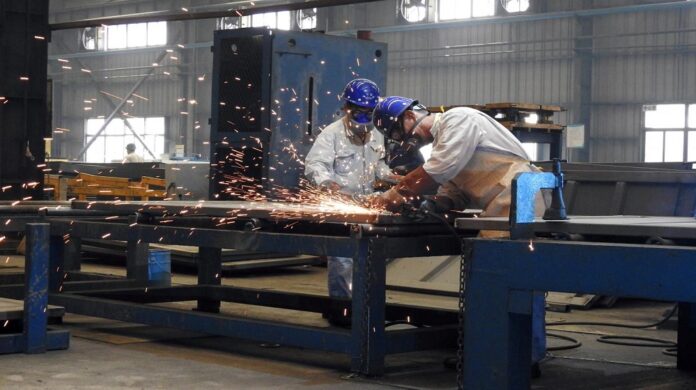 ISLAMABAD: The Large-scale Manufacturing Industries (LSMI) production grew by 5.02pc on a year-on-year basis during the first month (July) of the current fiscal year (FY21) as compared to the corresponding month of last year, Pakistan Bureau of Statistics (PBS) reported on Tuesday.

On a month-on-month basis, the industrial growth witnessed an increase of 9.54pc in July 2020 when compared with the indices of June 2020.

It is pertinent to mention that the provisional QIM is being computed on the basis of the latest production data received from sources, including Oil Companies Advisory Committee (OCAC), Ministry of Industries and Production (MoIP) and Provincial Bureaus of Statistics (PBoS).

Pakistan’s planning minister said Tuesday the government’s ability to control the Covid-19 pandemic “early” has benefited the country’s economy in terms of growth in the large-scale manufacturing sector.

Planning, Development, Reforms and Special Initiatives Minister Asad Umar termed the gain as a “dividend of controlling Covid early”, which paid off Pakistan “on the economic side also, as V-shaped recovery gets confirmed”.

“Large scale manufacturing numbers for July show more than 9pc growth over June and more than 5pc growth vs July 2019,” Umar said in a Twitter post.

Dividend of controlling covid early paying off on the economic side also, as V shaped recovery gets confirmed. Large scale manufacturing numbers for july show more than 9% growth over june and more than 5% growth vs july 2019

In a parallel development, the Asian Development Bank (ADB) which, in June, had approved a $500-million loan to Pakistan as part of the CARES Programme — said in a report released Tuesday that the country could see economic recovery in 2021 if Covid-19 subsided and structural reforms were resumed.