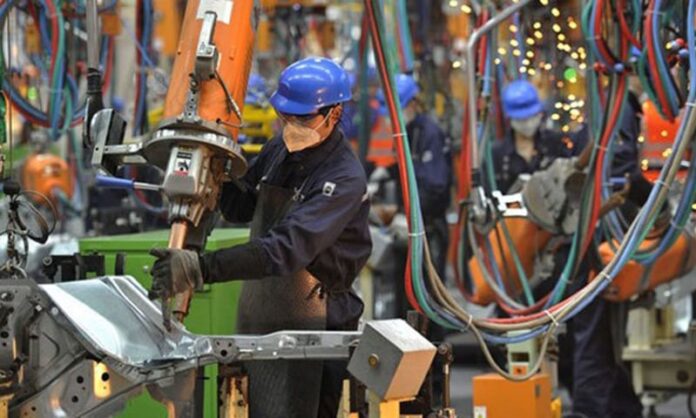 ISLAMABAD: Continuing with the positive trend, the country’s large-scale manufacturing registered a growth of 7.65pc YoY in September 2020, when compared with the same month of last year.

The growth in September is the third consecutive increase in LSM output since the revival started in July. Cumulatively, LSM jumped 4.81pc YoY in the first quarter (July-Sept) of FY21 as compared to July-Sept FY20.

When compared with Aug 2020, large-scale industrial output grew more than 10pc during the month under review.

According to data released by the Pakistan Bureau of Statistics on Thursday, the rebound in LSM output, which came after months of damage inflicted by Covi-19, was mainly due to positivity in construction, sugar, automobile, and pharmaceutical sectors.

Lowering of interest rates and reduction in duties on raw materials are expected to further spur economic activities in the current fiscal year, it added.

The monthly data of manufacturing showed that 9 out of 15 sub-sectors in LSM rose in September.

As per the data, production of 11 items under the Oil Companies Advisory Committee dipped 2.84pc year-on-year during September; 36 items under the Ministry of Industries and Production rose 7.92pc; while 65 reported by the provincial bureaus of statistics increased 9.34pc.

The LSM constitutes 80pc of the country’s total manufacturing and accounts for nearly 10.7pc of the national output. In comparison, the small-scale industry makes up for just 1.8pc of GDP and 13.7pc of the secondary sector.

Likewise, cement output surged 21.32pc in Sept 2020 mainly due to greater demand following the start of construction and exports from the country. The production of paints and varnishes were up 42.82pc.

The data further showed that the output of petroleum products dipped by 2.84pc in Sept. The output of two oil products — petrol and kerosene — was up 5.38pc and 13.45pc, respectively. The production of LPG was up by 9.65pc during the month under review. The production of furnace oil, Jet (airline) fuel, lubricating oil, jute batching oil, and solvent naphtha also registered growth.