Hazaras continue sit-in against killing of miners for fifth day

–Maryam, Bilawal criticise PM Imran for not having visited the community

QUETTA: Thousands of members from the Shia Hazara community protesting the killing of coal miners in Balochistan continued the sit-in for the fifth straight day on Thursday, refusing to bury the bodies despite a request from Prime Minister Imran Khan and assurance of a visit.

On Sunday, the so-called Islamic State (IS) militants slit the throats of 11 miners belonging to the Hazara community in a residential compound near a mine site in Mach town of Balochistan’s Bolan district, filming the entire incident and later posting it online.

Six of the miners were already dead when found, and five who were critically wounded died on the way to the hospital.

Thousands of Hazaras have since staged a protest, arranging the coffins across a highway in Quetta, refusing to withdraw until the prime minister meets them and the killers are brought to justice.

Despite extremely harsh weather as the mercury drops to below freezing point, the mourners, including women and children, have refused to leave until Prime Minister Imran Khan meets them and the killers are brought to justice.

In a show of solidarity with the victims of the Mach killing, the business community called for a complete strike in Quetta. All main business centres of the provincial capital remained shut.

A day earlier, PM Imran assured the demonstrators of a visit “very soon” to “offer prayers and condole with all the families personally”.

In a series of tweets, the prime minister “reassure[d] the Hazara families who lost their loved ones in a brutal terrorist attack in Machh that I am cognizant of their suffering & their demands”.

“I share your pain & have come to you before also to stand with you in your time of suffering,” he said.

However, the unmoved protesters continued the sit-in on Thursday, saying they would not bury their dead relatives.

“We have become tired of picking up the bodies of our people,” Syed Agha Raza, a Shia Hazara political leader, told Reuters.

A young protestor, Masooma Yaqoob Ali, told Reuters her elder brother along with four other relatives were among those killed. “Now we have no male member [of our family] to take coffins of our brother and other relatives to the graveyard for burial,” she said, shedding tears as she spoke.

Meanwhile, Balochistan Chief Minister Jam Kamal Alyani has also requested the protesters to “not link the burials [of the miners] with Prime Minister Imran’s visit”.

Addressing a press conference in Quetta along with federal ministers Ali Haider Zaidi and Zulfi Bukhari and members of the Shia community, Alyani said that as Muslims, we “have our religious responsibilities [to bury the deceased]” and these should be fulfilled.

“I would request the community to not associate it with some official’s visit,” he added.

Bukhari and Zaidi arrived in Quetta late Tuesday night on the directions of the prime minister to hold talks with protest organisers.

The protesters have refused to bury the victims of the attack until demands, which include the resignation of the Balochistan government, are met. The demonstrations spilt over into Lahore, Karachi, Multan and other cities on Thursday.

Several roads in Karachi were blocked on Thursday as protests continued for a third consecutive day and reached different areas of the metropolis. Television footages showed plumes of smoke rising as demonstrators took to the streets, burning tyres and wood and disrupting traffic. 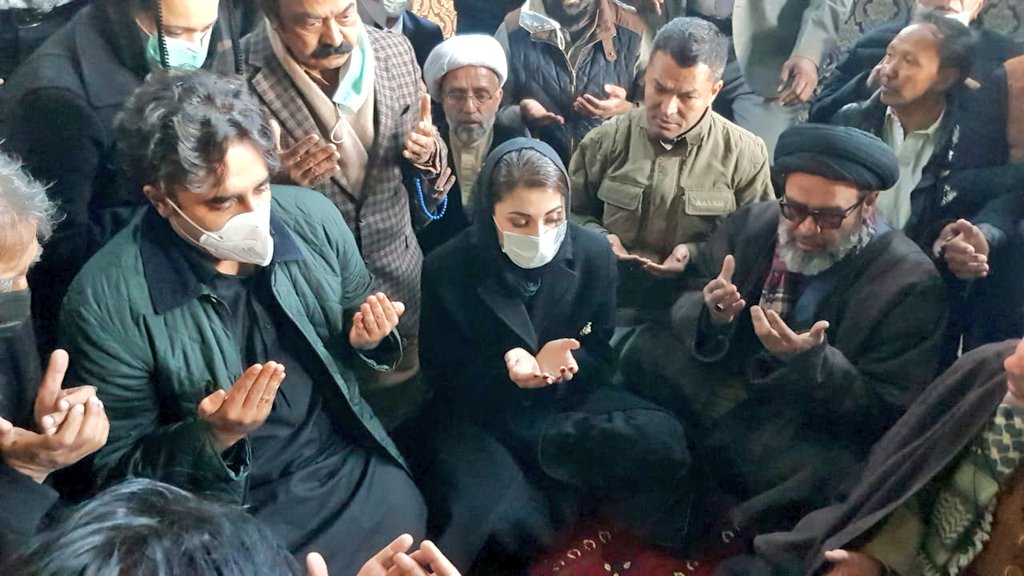 “I ask Imran Khan, these bodies that lie here, is your ego greater than these?” she asked while addressing the crowd which was protesting the Mach killing victims.

Maryam rhetorically asked if PM Imran had not come in fear of criticism, and advised him to come to share in the grief.

“I salute you all. You have more than 2,000 people you have lost. Each one of you is an open book, telling the story of such pain and sorrow,” she said.

In a tweet on Wednesday, Maryam had said: “On the direction of Nawaz Sharif I’m going to my sisters and brothers [in Balochistan] with a request to hand over their dead to Allah Almighty. I am sure they will not reject my request. For the last four days, the Hazara community has been calling the heartless in Islamabad.”

The PPP chairman lamented the fact that every time he came to Quetta, it was due to unfortunate circumstances like these.

Bilawal deplored the state’s failure to implement the National Action Plan for deterrence of such crimes and how every time one comes to visit the community, it is because such an incident has occurred.

“Pakistan is a country where even our martyred and the dead have to protest,” he said. Bilawal added that while living expenses such as gas and electricity kept becoming more expensive, “the people’s blood is cheap”.

“The blood of our labourers is cheap, and that of political workers, police officers, lawyers, residents and the Hazara community.”

Separately, Majlis Wahadat-e-Muslimeen (MWM) leader Allama Syed Hashim Moosvi denied that an agreement had been reached between the Hazara community and the government while speaking to the media in Quetta, adding that the protest would continue till the demands were met.

Furthermore, Federal Information Minister Shibli Faraz said that PM Imran will visit Quetta to express condolences with the families of those killed in the Mach incident.

Talking to the media persons on Thursday, the information minister said that negotiations are underway with the protesters to end the sit-in, adding whatever transpired in the Mach incident is beyond words.

These incidents have taken place in the past as well and the perpetrators behind must meet their due fate, the federal minister said, adding that some elements are always trying to create complications.

“We have listened to the demands put up by the protesters and none of which are unreasonable. The compensation money as announced will be soon disbursed amongst the victim families,” Faraz said.

“We want that the funeral rites of the martyrs are soon performed and they are buried,” he said. The federal minister remarked that it is not the right time or the right event to do politics over and said the country cannot be transformed into Sweden in two years with all its issues addressed.