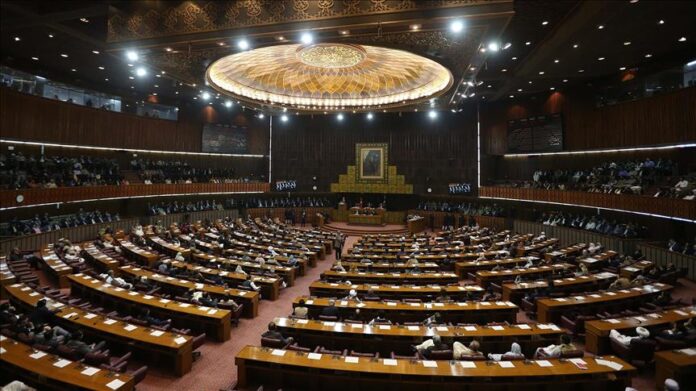 ISLAMABAD: The Upper House of the Parliament was informed on Friday that the government has paid back $16.4 billion external debt and Rs19.9 trillion domestic debt during the last two years.

To another question, Hammad Azhar said the country’s foreign exchange reserves have increased to $20 billion despite record debt servicing, adding that the State Bank of Pakistan (SBP) has forex reserves of around $13 billion.

The reserves have increased due to improvement in exports and remittances, he maintained.

The minister said the current account has shown a surplus of $1.6 billion during the first five months of the current financial year against a deficit of $ 1.7 billion in the corresponding period of last year.

To a separate question, he said no cut on the NFC share of provinces has been imposed by the federal government. “It isn’t true that the government has imposed a cut of Rs154 billion on the share of Khyber Pakhtunkhwa in the NFC Award.”

The minister said that special economic zones will be constructed under the mega China-Pakistan Economic Corridor (CPEC) framework, adding that construction work on three SEZs has been expedited.

Meanwhile, Adviser to PM on Commerce Abdul Razak Dawood informed the house that the government was taking concrete steps to boost exports.

He said the government has strengthened its economic ties with African countries under its ‘Look Africa Policy’ to enhance the outreach of Pakistani goods in international markets. “Trade committees have been formed to conduct bilateral trade negotiations with various countries,” he added.