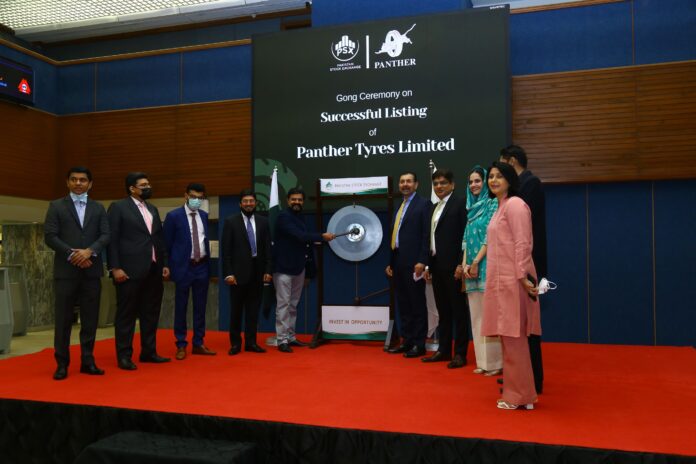 KARACHI: The Pakistan Stock Exchange (PSX) on Monday held a gong ceremony to mark the listing of Panther Tyres Ltd.

The successful initial public offering of Panther Tyres Ltd was this fiscal year’s fifth listing on the stock exchange in FY21. The gong was struck by PTL CEO Mian Faisal Iftikhar amidst the presence of PSX Managing Director Farrukh H. Khan. Also in attendance were CEO and senior management of Arif Habib Limited, which was the consultant to the issue.

The issue of PTL consisted of 40 million ordinary shares whereby the bidders were allowed to place bids for 100pc of the issue size through book building method. However, successful bidders were provisionally allotted 75pc of the issue size or 30 million shares while the remaining 25pc, i.e. 10 million shares, were offered to the retail investors. The issue was offered at the book building stage through a floor price of Rs47 per share (face value of Rs10 per share & premium of Rs37 per share) with a price band of 40pc above the floor price.

The book building was extremely successful with a large number of institutions and high net-worth individuals taking part in the bidding whereby the issue was oversubscribed by 4.37 times. The strike price was locked in at Rs65.80 per share. The retail portion also attracted tremendous response from the public with the Issue being oversubscribed by 1.92 times or 9.196 million shares.

Panther Tyres raised capital through the issue to partially fund the company’s expansion project. The expansion includes import of machinery to enhance the production capacities of tyre sets and tubes (packed).

Speaking about the successful listing of PTL, PSX MD Farrukh Khan stated, “It is a proud moment for PSX that yet another company has successfully completed its IPO and has been listed on the exchange. I congratulate Panther Tyres for their successful book building which attracted a large number of institutional investors and high net worth individuals leading to effective price discovery.

“Panther Tyres is an important part of the industrial landscape of Pakistan; a landscape which PSX is focusing on to augment and enhance in order to strengthen the country’s economy. PSX is at the forefront, working in tandem with the SECP and consultants, to facilitate and encourage companies to raise capital through the stock exchange which is not only a welcome and positive development for investors and other market participants but also for the economy of Pakistan as a whole.”

In his address, PTL CEO Mian Faisal Iftikhar said, “I am delighted that Panther Tyres Ltd is getting listed at PSX Limited; it’s an honour and privilege for us. The immense oversubscription received in both book building and general public portion reflects investors’ confidence in our business for which we are really grateful. This IPO will help us materialize our expansion plan and will take us one step forward towards our long term goal of reducing our Country’s reliance on imported tyres and tubes.”