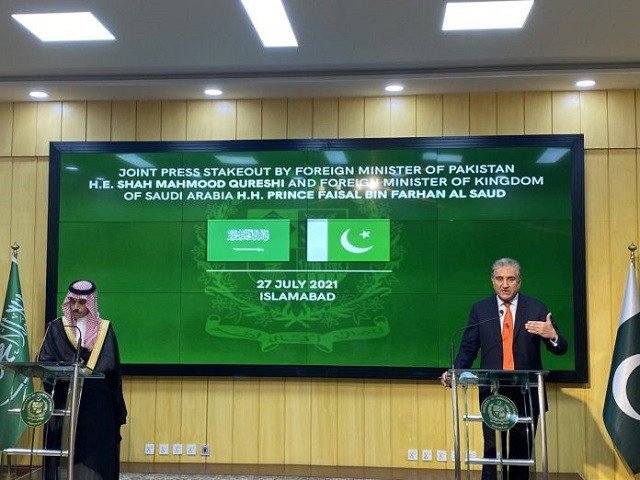 ISLAMABAD: Pakistan and Saudi Arabia on Tuesday discussed how to ease Covid-19 travel restrictions, which have stranded around 400,000 Pakistani workers back home, foreign ministers of the two countries told reporters.

Islamabad took up the issue with Saudi Foreign Minister Prince Faisal bin Farhan Al Saud, who is on a one-day visit to the country.

FM Faisal is the first high profile Saudi official to arrive in Pakistan after cracks in their historically friendly relations earlier this year.

Foreign Minister Shah Mahmood Qureshi told a joint news conference in Islamabad that around 400,000 of over two million Pakistani workers in Saudi Arabia had been stranded at home due to travel restrictions.

“They are facing challenges, you know the travel restrictions and you know the issues of vaccination,” he said.

Highlighting the hardships being faced by Pakistani nationals, Qureshi expressed the hope that in view of the improved situation on the ground in Pakistan, Saudi Arabia would take steps to facilitate their travel to the kingdom.

Saudi Arabia, which bars direct travel from Pakistan, has only approved the AstraZeneca, Pfizer, Moderna and Johnson and Johnson vaccines, so anyone arriving without one of those shots is required to quarantine at a cost many Pakistani workers say they cannot afford.

Most Pakistanis have received a Chinese vaccine, although the Saudi FM said his government had given Covid-19 shots to 1.7 million Pakistani workers.

The Pakistani workforce in Saudi Arabia contributes $7 billion, or a quarter of the country’s total annual remittances.

“We talked about the challenges that Covid-19 has imposed on all of us. It has imposed challenges, travel restrictions, all of these we are working on,” Prince Faisal said.

Would-be Pakistani expatriate workers, desperate to obtain a Pfizer/BioNTech or AstraZeneca Covid shot so they can travel to work in Saudi Arabia, have been holding violent protests, at times storming vaccination centres.

Pakistan has lately started allowing people under 40 who have to travel for jobs abroad to obtain the AstraZeneca or Pfizer vaccines, of which the country has limited supply obtained through the COVAX system.

“We have made good progress on what the structure should be, what the organisation should look like and what should be the work plan,” the FM said, adding that there would be focal persons in both the countries to oversee the progress made on this front.

The foreign minister further said that new areas, such as information, media, culture and entertainment, were also discussed during the bilateral talks.

“The vision 2023 is about transformation, and this is one area that had not been tapped into in the past, and we can contribute to,” Qureshi maintained

The foreign minister said that the two countries had been supportive of each other in difficult times. He further hoped that the kingdom would review its visa restrictions for Pakistanis.

The FM further informed that he had a discussion on climate change, and how to combat the issue collectively with international cooperation, with his Saudi counterpart.

FM Qureshi also thanked the Saudi government for its ‘unwavering support’ on FATF. “Their support has been phenomenal,” the top diplomat stated.

He added that Saudi Arabia had also been a part of the Organisation of Islamic Cooperation (OIC) Contact Group on Jammu and Kashmir. The kingdom has been supportive and has shown clarity in supporting Pakistan on the disputed territory, he said.

Regarding the situation in Afghanistan, the foreign minister said that he had a good discussion on the matter with the Saudi minister.

“We discussed what to expect, what the challenges are and what opportunities lay ahead of us. Our approach is the same and our objectives are shared,” he said.

Qureshi further stated that there were immense opportunities for Saudi Arabia for investment in SEZs under the CPEC project. He said our skilled, semi-skilled workforce and professionals could also make significant contributions to the Saudi Vision 2030.