Traders irked as Chinese authorities keep reneging on their promises 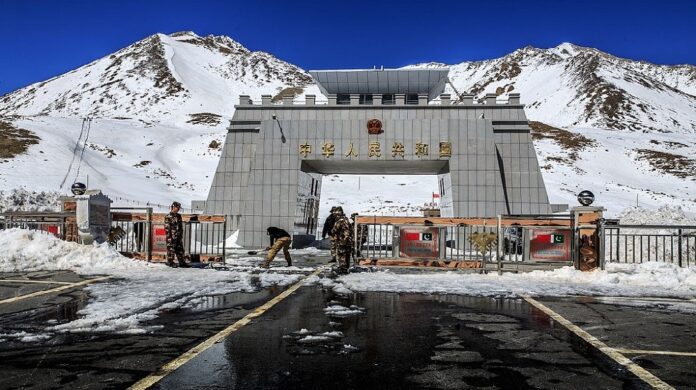 ISLAMABAD: Although the Chinese government had conditionally opened the Khunjerab pass for one side trade, it has again closed the border stopped sending cargo vehicles to Pakistan without any reason.

In a letter sent to secretary Commerce, Gilgit Baltistan (GB) chief minister and other ministries and authorities concerned recently, the Pakistan Gemstone and Mineral Association (PGMA) claimed that Chinese authorities only allowed temporary opening of the border to send Chinese goods to Pakistan.

As per the association, Pakistani traders have been suffering from a year and a half due whereas a notification issued jointly by the Ministry of Foreign Affairs of Pakistan and the Chinese authorities had assured that the border will remain open for unilateral trade without any closure till December 31.

“This is not for the first time that the conduct of Chinese with our traders has been biased and inhumane. Our trucks which are fully loaded are stuck at Tashkurgan and we have to pay 45,001 Chinese Yuan daily, equivalent to Rs1,140,000, as parking cost,” the trade body claimed.

Previously, following Pakistan’s persistent requests, China had agreed to open Khunjerab border for trade by May 1, 2021 with stiff conditions in view of the Covid-19 situation. However, the neighboring country had not opened the border despite all arrangements made on Pakistan’s side of the border, going back on its word.

After a meeting at the Ministry of Commerce, China again promised to allow goods to cross the border by July 10, for only cargo containers, leaving the goods near the border from where the same would be lifted by Pakistani importers.

As per a letter issued in April, the Chinese government had informed that their exporters would leave the goods on a specific location of Pakistan’s side of the border from where importers may receive them after following the SOPs.

Similarly, exporters would also leave their goods at the same location which buyers from China would receive after completion of the same process on their side of the border.

As per the letter, personnel and the vehicles of both parties have been directed to work in different time frames to avoid direct contact. In this regard, loading and unloading, dropping and hanging up the trailer are to be done separately when the cargo inspection channel is opened.

The opening of cargo inspection channels, the letter described, will be implemented in two phases keeping in view that disinfection and sterilisation facilities at Khunjerab-Sost Port will function from May 1.

“In the first phase, from April 1 to April 30, both sides should conduct activities separately. There is no need to reposition the container after unloading. The operation area is on the Pakistani side of the boundary under No 7,” Chinese authorities clarify in their reply.

Noting that the entire process would be carried out in Pakistan, local traders termed the conditions unjustified.

Islamabad then had asked China to reopen the border to facilitate cross-border trade and people-to-people exchanges.

In a letter sent to the Embassy of China in Pakistan, the Ministry of Foreign Affairs had stated that the border was closed on December 1, 2019 as per schedule due to the winter season, while its opening on April 1, 2020 was postponed due to the outbreak of the Covid-19 pandemic.

“To support the lives and livelihood of the local population on both sides of the border, it is imperative that regular cross-border trade and P2P exchanges may be resumed. Therefore, the border may be opened from April 1,” the ministry stated. “The esteemed embassy is requested to take up the matter with relevant quarters to open the border on the said date for smooth and regular cross-border movement.”

The China-Pakistan border remains closed from December 1 till March 31 every year due to severe weather conditions, as per the bilateral agreement. For the rest of the year, however, the border remains open for two-way movement of passengers as well as transportation of goods and cargo.

The border was opened for a few weeks in July last year to facilitate the release of stranded containers, and again in September, to shift medical material gifted by the Chinese government to GB to deal with Covid-19.