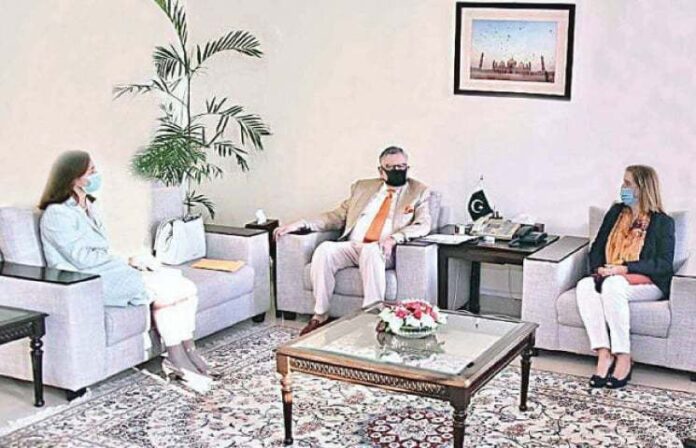 The finance minister was meeting with the nominated Resident representative of the IMF Esther Perez Ruiz, who paid a courtesy call on Shaukat Tarin at the Finance Division.

Tarin stated that Pakistan is firmly committed to pursuing an all-inclusive and sustainable economic growth with key focus on “bottom-up” approach to uplift marginalised segments of the society.

To this end, he said the government intends to engage development partners to broaden economic development through fiscal consolidation and prudent economic measures amid Covid-19 pandemic and in the post pandemic scenario.

The finance minister commended the IMF for extending timely assistance during testing times. He briefed the IMF representative on key initiatives to provide maximum relief to the masses and said the government was taking a range of administrative, policy and relief measures to absorb the upward pressure on prices of basic food commodities due to the pandemic.

“The government has adopted a multi-pronged strategy to enhance revenue collection and to broaden the existing tax base,” he said, highlighting the FBR’s performance in surpassing revenue collection targets in recent months despite ongoing pandemic.

“The broadening of the tax base is one of the key priorities of the government,” he added.

The finance minister said the government would formally launch the ‘track and trace’ system for tobacco products on Oct 1 this year. “This is also one of the requirements under the EFF programme,” an official statement quoted Tarin as saying.

He also stated that reforms were being carried out in the power sector to address the issue of circular debt.

Negotiations with the IMF for sixth review of the EFF currently under recess along with Article IV consultations will begin on October 4. These will be followed by Tarin’s scheduled visit to Washington to hold meetings with the IMF management and attend annual meetings of the World Bank and IMF from October 11 to 17.

The finance minister felicitated Ruiz and expressed his best wishes for her upcoming assignment beginning in November.

The new representative of IMF commended efforts of Pakistan in managing the spread of virus through a series of smart and targeted lockdowns to strike a balance between lives and livelihoods. She expressed hope to work closely with the government of Pakistan during her tenure.