Govt to set up centre of excellence on animation 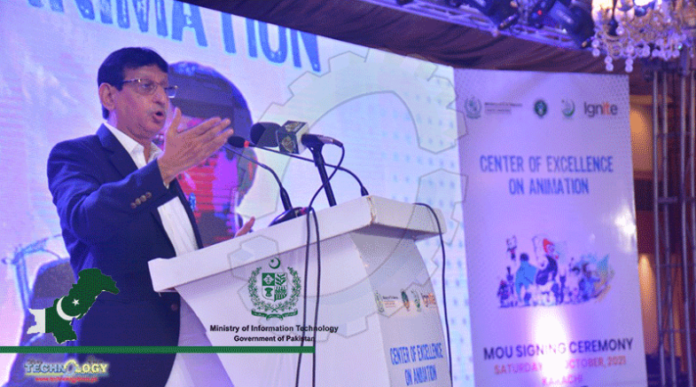 KARACHI: The establishment of ‘Animation Centre of Excellence’ is essential as the world has a big animation market while Pakistan has no significant share in it, said Federal Minister for Information Technology and Telecommunication Syed Aminul Haque.

At a memorandum of understanding (MoU) signing ceremony between Ignite and the University of Karachi on Saturday, the minister emphasised that the centre of excellence would benefit students of different universities including Karachi University.

“We want to start work on it immediately,” he said, adding that Rs2 billion had been allocated for the project, of which Rs1bn would be released immediately. “The animation centre will be completed within six to eight months.”

Around Rs31bn had been spent on connectivity “as we want to connect the whole country to the internet service”, the minister said.

Around 100 million people were using broadband services and 180 million were using mobile phones, he said, pointing out that new mobile phones were also being manufactured in Pakistan. “Smartphone for everyone is our vision.”

IT exports have increased by 57 per cent this year, the minister said, adding that 5G would be launched by December 2022.

He said the estimated size of the global animation industry is about $370bn and it is expected to double by 2030 to $642bn. “One may question Pakistan’s current market share in this big market. The answer is a rather embarrassing: ‘nothing’. But this does not mean that our young people are below par in competency or skill to anyone in terms of creativity and innovation. The issue is that they have never been able to access such facilities that can help augment their talent. Keeping these shortcomings in mind, our ministry is now committed to providing the youth with all those facilities, infrastructure, and trainings that are too expensive for an average person to afford here,” he said.

“Pakistan has a huge potential in this area and it can be one of the key regional players in gaming, animation and multimedia through training, mentorship of our youth, who can be facilitated though gaming and animations startups and incubation/acceleration programmes.