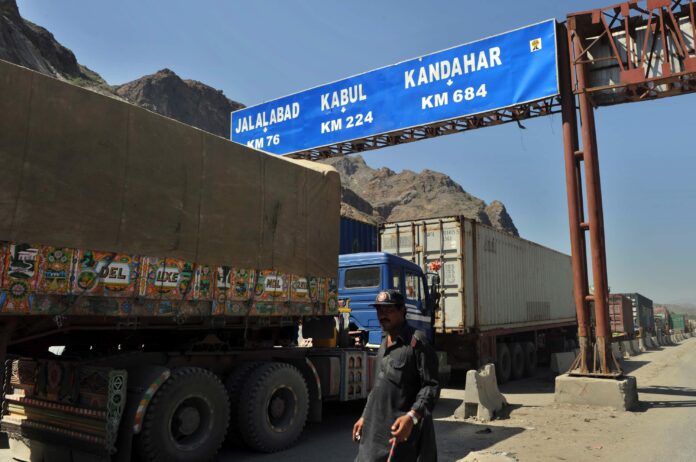 ISLAMABAD: An apex committee meeting of the Afghanistan Inter-Ministerial Coordination Cell (AICC) has taken notice of disruption of trade via Torkham border due to a dispute over the cost of fumigation.

As per details, the Ministry of Food Security and Research (MoF&SR) has allegedly been aiding monopoly of a particular blue-eyed company by awarding it the contract for importing methyl bromide, which is used for fumigation, in violation of rules while others are discouraged to participate in the business.

The issue was raised during a meeting of the AICC, which was reportedly chaired by National Security Adviser Dr Moeed Yusuf. Foreign Minister Shah Mehmood Qureshi, Advisor on Finance Shaukat Tarin, along with other senior civil and military officers also attended the meeting.

Sources said that importers denied paying higher fees being charged by the private fumigating company as importers  complained that it had been given free hand to charge whatever rate it wanted for fumigating a container.

Sources said that the fumigation company, Adeel Pesticides, was charging over Rs45,000 per container for fumigation whereas the cost should be between Rs5,000 to Rs10,000.

“Importers denied paying the huge amount for fumigation before entering Pakistan, resulting in a halt of imports from Afghanistan which included goods such as cotton from Central Asian countries.

As per documents available with this scribe, while taking serious notice of the situation at the Afghan border, the AICC has asked MoFS&R to take action against the monopoly of the said company.

The ministry has also been asked to brief the apex committee about allocation of import rights of methyl bromide on Friday along with a brief on the grant of contracts awarded to companies for fumigation and the procedure of fixing rates for the process.

Earlier in September, Ahmad and Kamran Traders (Pvt.) had written a letter alleging large scale corruption in the country’s agricultural sector with the connivance of officials in the Department of Plant Protection (DPP) and MoFS&R to the Prime Minister office, the National Accountability Bureau (NAB), FIA and other ministries concerned.

“There is only one company, National Chemicals, importing methyl bromide from the USA. Though there are 54 fumigation companies that are registered with the DPP, only their sister fumigation companies namely Adeel Pesticides, Pak Pansy, Pest Management Pentagon Fumigation Services, and Tahir Fumigation Expert are importing and exporting fumigating goods and charging sky high rates,” the letter had stated.

Documents seen by Profit state that a ‘mafia’, which controls all operations, remains unharmed even after complaints registered by trade bodies including the Federation of Pakistan Chambers of Commerce and Industry (FPCCI), Karachi Chamber of Commerce and Industry (KCCI) and other trade associations while importers and exporters of agriculture items are allegedly grilled and harassed on a daily basis by DPP staff both at seaports and airports.