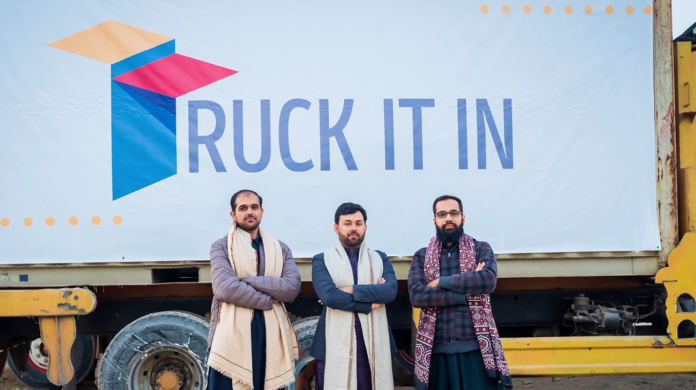 Truck It In’s seed round was jointly led by venture capital firms Global Founders Capital (GCV) and Fatima Gobi Ventures (FGV). The seed round is the largest of its kind in the MENAP (Middle East, North Africa, and Pakistan) region.

An internal document shared by the startup confirms that the amount raised was $13 million. The latest round brings the total raised by Truck It In to $17.5 million, which has earlier announced raising $4.5 million in pre-seed round.

Founded late in 2020 by Muhammad Sarmad Farooq, Raza Afzal, and Haider Navid, Truck It In is focused on streamlining road freight for more than three million businesses in Pakistan. In a primarily offline market, truck freight is a highly fragmented industry with solo truckers relying on brokers or big contractors for the supply of loads against arbitrary commissions.

Truck It In provides an app-based connectivity solution whereby solo truckers can secure loads directly from corporations and haul them within the country. Corporations also have an online platform that allows them to schedule loads for delivery in a streamlined manner with transparent pricing, thereby increasing efficiency.

Muhammad Sarmad Farooq, CEO of Truck It In, said that the new funds will be utilised to hire workforce, primarily on the engineering side. “This seed round comes at an opportune time, as the funds will be deployed to expand our business,” Sarmad said.

“We have set the fundamentals and core infrastructure and we know our path to sustain. We will expand our operations on that and double down on the path to scale,” said Sarmad Farooq.

According to a statement from the startup, in the past year, their revenue grew 37x. “The impact generated allows truckers to lead better economic lives while serving the country,” said the statement.

Commenting on the round, Tito Costa, partner at Global Founders Capital, said, “The team at Truck It In is transforming the logistics industry in Pakistan at an unprecedented pace. We are honored to back them again to expand their coverage further and bring their solution to shippers and truckers across the country.   ”

“The pandemic has accelerated digital adoption among larger players, widening the gaps of the haves and have-nots in the logistics world. We believe Truck It In is key to closing this gap by making it easy for SME truckers to streamline operations and compete on a more level playing field while keeping costs competitive and serving as a vital lifeline for Pakistan’s thriving economy,” Ali Mukhtar, General Partner of FGV, said.

Truck It In’s prime competitors include UAE-based TruKKer, Egypt’s Trella which expanded into Pakistan in November 2020, and Lahore-based Freightix. While Trella raised $42 million in Series-A round in June this year for operations in Egypt, Saudi Arabia, and Pakistan, Truck It In is by far the most well-funded Pakistan-only trucking startup, followed by Freightix which raised $2.2 million in 2019.

On the other hand, TruKKer, which has operations in the MiddleEast and Pakistan, has raised $44.4 million across 9 funding rounds, according to crunchbase data. Last year, TruKKer acquired Karachi-based trucking startup TruckSher for an undisclosed amount.