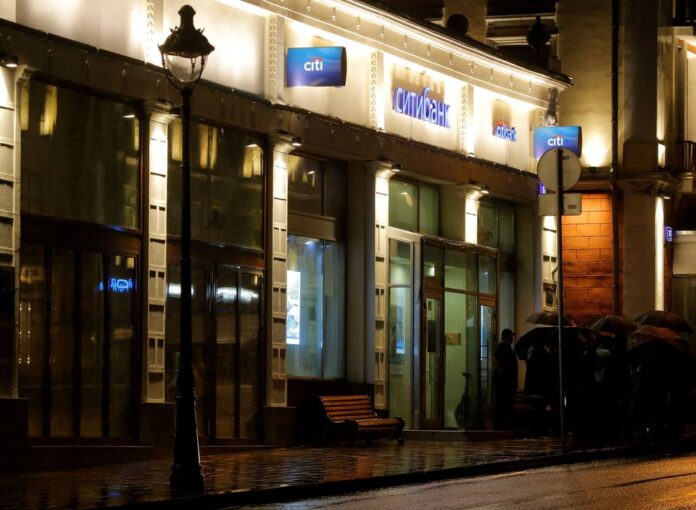 Global banks face an arduous and costly process if they decide to close businesses in Russia, banking sources and experts say, complicating decisions over whether they should withdraw.

Sanctions placed on Russia following its week-old invasion of Ukraine and retaliation from Moscow have raised questions over how much longer banks can continue.

One banking source raised particular concerns about how banks navigate an order on rouble lending and the implications for foreign companies in Russia. Banks are also weighing the risk to their reputations in staying there.

While banks have not yet announced exits, at least one global lender with operations in Russia is creating an in-house team and working with outside lawyers and consultants to determine whether and how it could exit before making public announcements, one banking source said.

British energy giants BP and Shell (SHEL.L) last week said they would quit Russia. BP is abandoning its stake in Russian oil giant Rosneft, resulting in charges of up to $25 billion, it said.

However, banks will find it harder to extricate themselves, experts say.

“For an oil company, walking away from refinery assets in Russia might be as simple as dropping the keys and leaving but a unilateral exit is not possible for a financial services firm,” said Dan Awrey, a professor at Cornell Law School who specializes in financial regulation.

Under normal circumstances, banks would not be able to exit a country without the consent of its regulators and central bank. They would also need a willing buyer to take control of their loans and other commitments, experts say.

“You can’t just unilaterally walk away from lending commitments and other types of financial claims,” said Awrey. “There’s somebody on the other side and that will make it much more complicated.”

Of particular concern was an order from the Kremlin dated March 1, prohibiting rouble lending and credit to persons of foreign states that commit unfriendly acts, one banking source said.

Banks would need to work out the implications of that for their operations and whether it prohibited overseas companies in Russia – from countries that sanctioned Moscow – from accessing rouble credit facilities, which would deal a blow to them being able to operate in the country, that source said. The source questioned whether foreign banks could continue to operate in Russia given the circumstances.

Global banks are also trying to figure out how the U.S. sanctions on the Russian Central Bank may affect related infrastructure and market plumbing, and are being very cautious where they identify a nexus with the central bank, according to two U.S.-based industry sources. That could also make global banks reluctant to transact in roubles.

Sanctions have effectively ended any realistic chance of global banks selling Russian assets, said one senior banking source who asked not to be named. That leaves winding down assets or writing them off as the only viable options, the source said, which would involve a financial hit.

One option being assessed is whether banks could be sued by clients in Russia if they walk away from commitments, that banking source said.

Some banks could look to keep skeleton operations in Moscow, rather than pulling out entirely, the same source said. That would avoid the complication of having to re-apply for a banking license and build a business from scratch in the future.

Citigroup (C.N), the U.S. bank most heavily exposed to Russia, is already experiencing how difficult it is to leave.

The bank announced last year that it would sell its Russian consumer business as part of a broader restructuring. The only publicly named buyer had been Russian state bank VTB Bank (VTBR.MM), which is the subject of U.S. sanctions.

It is doubtful whether Citigroup would be able to transact with another Russian buyer due to the sanctions and foreign banks are unlikely to want to buy Russian assets at the current time, analysts and lawyers say.

Citigroup Chief Executive Jane Fraser said Wednesday it was “too early to tell” whether a sale can proceed. Meanwhile, its Chief Financial Officer Mark Mason said the bank could have to write off nearly half of its $9.8 billion Russian exposure.

Austria’s Raiffeisen Bank International (RBI) is considering leaving Russia, two people with knowledge of the matter told Reuters this week, a move that would make it the first European bank to do so since the country’s invasion of Ukraine.

U.S. banks had already cut their exposures after sanctions were placed on Russia following its annexation of Crimea in 2014. However, banks like JPMorgan Chase & Co (JPM.N), Morgan Stanley (MS.N) and Citigroup have continued to underwrite and advise on Russian deals, and keep staff in the country.