The federal and Punjab governments are coming down on Imran Khan’s long march with an iron fist. 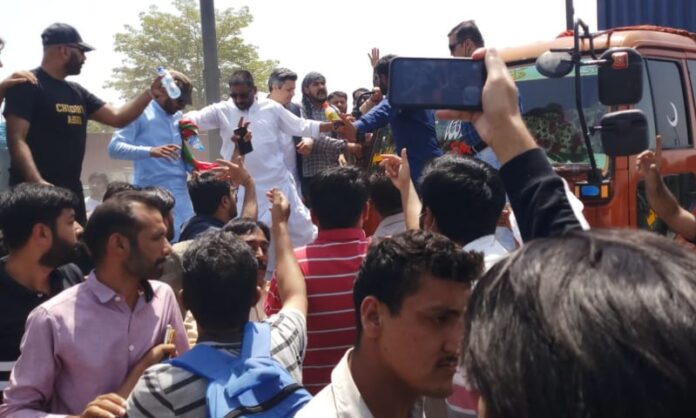 Lahore/Islamabad: As finance minister Miftah Ismail attempts to repair the damage done to talks between Pakistan and the International Monetary Fund (IMF), the political unrest in the country got going in earnest as the provincial administration in Punjab doubled-down on their decision to not let former prime minister Imran Khan have his long-march to Islamabad. Wednesday morning saw clashes in the streets between Khan’s long marchers and the police in Lahore.

After rounding up nearly 1200 workers of the Pakistan Tehreek i Insaf (PTI) in the late hours of Monday evening, major arteries of national highways as well as entrances to Islamabad and exits from Lahore have been blocked and riot-police deployed in an attempt to stop the march.

With section 144 imposed in these major cities, workers of the PTI are finding it difficult to determine plans for going ahead with their long-march, although the direction from their leader has been to remove obstacles placed by the state and make it to Islamabad.

As clashes erupted between government forces and PTI protestors, the Pakistan Stock Exchange’s (PSX) benchmark KSE-100 index continued to be ruled by the bearson Wednesday morning, after shedding nearly 500 points the day before, with analysts attributing the fall to the central bank’s hike in the interest rate coupled with the current political situation.

Continuing its charge against the rupee, the dollar rose in price again and hit a record-breaking Rs 202.5 on the interbank market on Wednesday.

In addition to the stock market continuing its plunge, finance minister Miftah Ismail is currently in Doha trying to outline the final points of Pakistan’s $6 billion deal with the IMF. The problem is that already Miftah, on the direction of Prime Minister Shehbaz Sharif, has expressed there will be no reduction in the massive fuel price subsidy hurting the economy. The increase in fuel prices was one of the agreed upon terms between the IMF and the former administration, whose talks were led by Shaukat Tareen.

The IMF talks are scheduled to end today, but the SBP Governor has already cautioned that they might be extended by a few more days. On Tuesday, word came in that Saudi Arabia is preparing to extend a $3 billion deposit given to Pakistan last year which might offer some modicum of relief. This is a rollover, not a fresh deposit, and as such will not add to the reserves but will stem their depletion. The government, which was hoping to get some breathing room via these routes, is still deeply entangled in the political crisis.

The government has the support of its allies, with PPP and JUI-F leadership flanking interior minister Rana Sanullah in his press conference where it was announced that the long march would be stopped. The overall situation, however, remains very delicately balanced.

The former prime minister himself is currently in Peshawar, where his party is still in power. From here he will lead what is expected to be the largest portion of the march down to Islamabad where they are supposed to meet in the red-zone. However, the highway police have confirmed that the motorway has been shut at the Swabi and Chach interchanges, and the pull there that crosses the river Indus has also been closed to all traffic. Containers have also been placed at the Burhan interchange, for traffic and marchers coming from the Swat, Mansehra, and Abbottabad regions.

Sources close to the PTI leadership have said that the former prime minister decided to join the march from Peshawar due to the relative security that his own party’s administration in the province could offer. According to these sources, there was a fear that much like the government had targeted PTI workers earlier, they could try and lay a hand on Imran Khan as well. Already, leaders of the PTI are on the record saying that if any attempts were made to arrest the former PM or block his way, “even Imran Khan himself could not stop the youth and party supporters from reacting the way they would.”

Another major feeder for the long-march is expected to be Lahore, where the PML-N’s provincial government has deployed heavy-police presence and has closed off all entry and exit points to the city. Punjab Home Secretary Syed Ali Murtaza confirmed that assistance of Rangers personnel had been requisitioned, and the district administration has been given strict orders to make sure no one crosses the provincial capital’s boundaries. Major roads including link roads leading toward motorways and GT roads have all been cut off through containers.
Lahore in particular seems to be under heavy lock-and-key after the killing of a constable on Monday night during raids conducted by the provincial government to round up a list of over 2000 PTI workers who were to be prevented from joining the march.

Well maintained sources in Punjab police informed Profit and Pakistan Today that the targeted list of PTI workers including Lahore included 2076 workers and a total of 1260 PTI workers from across the province, including Lahore, were arrested under the Maintenance of Public Order [MPO] Section 16 and 61 workers and leaders were arrested within 16 hours from Lahore only.

They also informed that 48 workers from Sheikhupura, 20 from Kasur, 20 from Nankana Sahib, 65 from Sahiwal, 12 from Okara, 16 from Pakpattan, 64 from Faisalabad, 31 from Jhang, 23 from Toba Tek Singh and 19 workers arrested from Chiniot

Similarly, 18 workers from Gujranwala, 10 from Sialkot, 20 from Narowal, 8 from Gujarat, 31 from Mandi Bahauddin, 2 from Hafizabad, 66 from Rawalpindi division, 197 from Sargodha division, 32 from Bahawalpur division, 183 from DG Khan division and 314 workers from Multan division were arrested.

They added that police officials were given strict instructions not to allow the protesters to come together anywhere in the city. Police have been issued high alert in Lalak Jan Chowk, Liberty Chowk, Shahdara and other areas and police personnel in formal dress have also been deployed on the roads. Meanwhile, ten prisoner vehicles were also deployed on the roads.

Moreover, the protesters would be shifted to jail immediately after the arrests and arrest warrants were issued for one month each whereas senior inspectors of Lahore police and SHOs have also been given the task of arresting the main leadership of PTI.

The Punjab Police continued patrolling in different areas of the city, major highways, bazaars and streets. A large contingent of Lahore police was also deployed outside the Lahore Press Club where the PTI leadership was to hold a press conference. However, barricades were set up at various places along the Mall Road and vehicles were searched at many places.

Sources in the Punjab Home Department also informed that mobile phone services will be shut down at 350 places in Punjab keeping in view the long march. However, in this regard, the Chief Minister Punjab has also approved the closure of mobile phone service in suggested points.

The federal capital was business as usual up until Tuesday night, with traffic moving as per usual. The expectation was that a major police presence would be deployed late at night, but the morning time saw no significant change in either Islamabad or adjoining Rawalpindi – where section 144 has also been imposed.

Motorway M1 and M2 approaching Islamabad have both been closed, while the entrances from Tarnol, G9, and Faizabad have all also been closed using containers. Single containers have been placed on some entrances while containers have also been stacked to make moving them more difficult – a feat that some PTI workers have achieved in parts of Lahore. Islamabad expressway, zero point, and Bani Gala have all also been cordoned off. During the late hours of the evening, all entry points from GT road were sealed, traffic for regular passengers was blocked towards the red-zone.

The security of the red zone has been handed over to the Pakistan Army.

There is heavy police presence in the city as well, with more than 22,000 officials deployed. At least 5,000 of these are from the Islamabad Capital Territory Police Department while 8,000 have been brought in from the Punjab constabulary, 2,000 anti-riot policemen, and 500 women police constables as well. All of these forces have been armed to the teeth with tear-gas, riot-gear, and other non-deadly-force equipment.

The Rawalpindi division has also been completely sealed, and contact with areas such as Attock, Jhelum, and Chakwal have also been sealed and cut-off.

The government sealed off the city’s exit on the Ravi River bridge to block the Long March participants. The road to Ravi Bridge was closed with heavy containers while the old Ravi Bridge was already closed for heavy traffic. Similarly, Saggian Bridge was also closed with tractor trolleys while the road leading to the motorway from Babu Sabu Interchange was also closed whereas, the roads leading to the motorway from Ring Road were partially open.

Motorway sources informed that the M3 and M4 motorways in Faisalabad were closed while the traffic on the motorway from Lahore to Islamabad was also closed. The sources further said that containers have been placed at all the interchanges of the motorway and police have been deployed. Jaranwala and Samundari Interchange on Motorway M3 have been closed while Aminpur, Sahiyanwala and Deputywala Interchange on Motorway M4 have also been closed. Similarly, the M4 motorway from Multan to Lahore has been closed from Abdul Hakim Interchange and containers have been placed on Chenab river bridge in Gujarat.

Containers have been set up at Sadhoki on GT Road in Gujranwala. In Sargodha, containers were set up at Salim Interchange to stop PTI workers, however, food trucks and citizens traveling from abroad were allowed to enter the motorway.

However, Islamabad Kohat Road has been closed with containers at Khushal Garh and Mankor check post. Public transport from Lahore to Islamabad was also partially closed due to the long march.