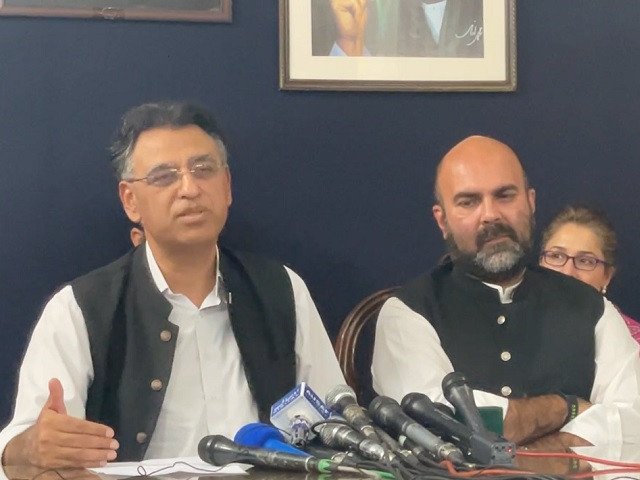 Attributed to Tarin, KP Finance Minister Taimur Jhagra and Punjab Finance Minister Sardar Mohsin Leghari, the telephonic conversation revealed that Finance Ministers of Punjab and KP were asked to write a letter to Miftah Ismail, explaining that the commitment made to the federal government cannot be fulfilled due to the recent devastation cause by floods in both the provinces.

It is pertinent to mention here that in the leaked phone calls, Shaukat Tarin is only directing both KP and Punjab finance ministers to write the letters to Miftah Ismail and it is inconclusive whether or not any direction to leak the letter to the IMF is made.

In the phone calls, some options of how to get the letter to the IMF are discussed but Shaukat Tarin clarifies that any final decision over the matter will only be taken by the party “Chairman” i.e. Imran Khan.

Both the PTI leaders asserted that Jhagra’s letter was addressed to Miftah and no copy was leaked to the IMF. Jhagra also defended the conversation between him and Shaukat Tarin in the audio leaks, saying that the floods had changed the situation and the provinces had to meet requirements of reconstruction and rehabilitation of the affectees and could not send surpluses to the federal government.

“We had no intention to leak [letter] to the IMF and we didn’t do it. Jhagra has challenged Miftah on this and today’s IMF board approval validates our stance. All we wanted the GOP to realise that due to floods there may not be surpluses available,” said Shaukat Tarin while speaking to Pakistan Today.

When contacted by Profit, at least two IMF officials based in Pakistan chose not to respond to the questions asked whether the PTI had leaked the letter to the IMF.

Shaukat Tarin also responded to the criticism by Miftah Ismail. Taking to social media blogging site, Twitter, Shaukat Tarin said that the PTI is alerting the Federal govt that due to floods, provincial surpluses may not be possible as funds should be spent on the marooned people of Pakistan.

At a press conference here on Monday, Jhagra, flanked by Secretary General Asad Umar, acknowledged the authenticity of a letter penned to the Finance Minister three days earlier by the KP government whereby the international money lender was informed that the province would not be able to meet the agreed upon budget surplus.

The letter came three days before the all-important executive board meeting of the IMF was to be held in Washington where the provision of credit to Pakistan’s bailout package is being considered.

Pinning the province’s inability to meet the surplus target on the former Federally Administered Tribal Areas (FATA) merger with K-P province and related administrative concerns, the minister said, “I own the letter” and “I wrote it myself” and requested the federal government to resolve the budgetary issue.

Defending the leaked conversation in a press conference, Umar said that there was “nothing wrong” with Tarin “advising” the ministers as he “understands the country’s economy” and that the request was in fact “needed” considering the current natural disaster the country faces.

In an attempt to “make the people aware of the facts,” the PTI leader alleged that the government was guilty of “cutting, pasting and editing” the leaked audio.

Umar argued that Tarin had merely “told both ministers to tell the federal government they should go back to the IMF and inform them that we have been hit by floods and face extraordinary circumstances”.

“Can anybody claim the advice isn’t good?” retorted Umar as he held that the ministers had been asked to seek concessions in the previously signed budget surplus agreement and added that the decision was in line with party chief Imran Khan’s policy during the Covid-19 pandemic as well.

“Why can’t you ask the IMF to give some space this year to use our money for flood-related expenses” when “Prime Minister Shehbaz Sharif is asking countries for funds to provide relief to the flood affectees”, he argued.

Meanwhile, former Human Rights Minister Shireen Mazari also defended the leaked conversation saying that “there is nothing illegal or wrong in the conversation”.

She instead criticized the “wiretapping” that made the audio leak possible in the first place.