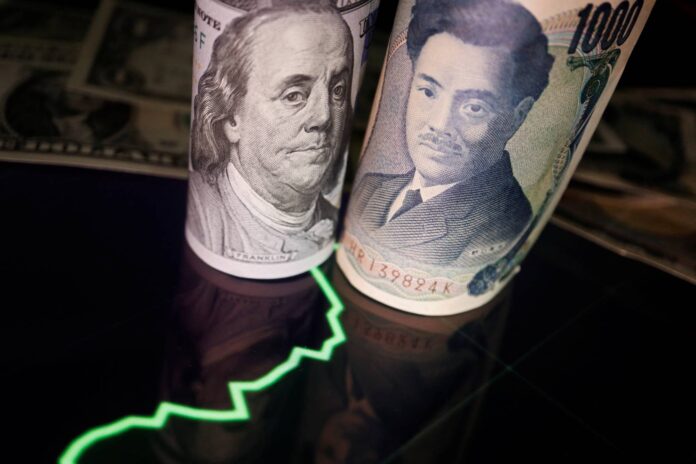 WASHINGTON: The dollar hit a 24-year high against the yen on Wednesday after US economic data reinforced the view that the Federal Reserve will continue aggressive policy tightening.

The Chinese yuan sank to a two-year trough, closing in on the psychologically important 7 per dollar mark despite steps by authorities to stem its decline. The Philippine peso slid to a record low.

The euro languished not far from Tuesday’s two-decade low, well below parity, as European Union ministers prepare to meet on Friday to discuss the energy crisis that is hammering industry and squeezing households.

A report overnight showed the US services industry unexpectedly picked up last month, reinforcing the view that the economy is not in recession and giving the Fed leeway for another super-sized 75 basis-point rate rise on Sept 21.

Markets currently give that scenario 75 per cent probability, with 25pc odds for a half-point hike.

The dollar soared as high as 144.38 yen for the first time since August 1998. Japan’s currency is extremely sensitive to moves in long-term US rates, and the yield on the 10-year Treasury note climbed as high as 3.365pc in Tokyo trading, a level not seen since June 16.

“The speed at which the dollar is appreciating against the yen is getting out of control and is at risk of becoming unanchored,” said Davis Hall, head of capital markets at Indosuez Wealth Management Asia.

“Right now you’re drawing in everybody to stop out by throwing in the towel,” he said. “We could reach 148 without MOF (Ministry of Finance) action.”

However, many analysts see intervention as difficult with the momentum behind the yen’s decline against the dollar driven by a widening divergence in monetary policy. Unilateral action would be even less effective, they say.

“Currency intervention or policy revisions by the Bank of Japan are likely to be difficult, and it will not be easy to stop the yen from falling.” The dollar will remain a force to reckon with over the remainder of this year and into the next as US interest rates rise and the economy outperforms its peers, according to currency strategists in a Reuters poll.

The euro wallowed below 99 cents, after dipping as low as $0.9864 overnight. The European Central Bank is seen likely to deliver a 75 bps rate hike on Thursday, but traders seem more focused on Russia’s decision to keep the key Nord Stream 1 gas pipeline shut indefinitely.

Sterling shed 0.32pc to $1.1480, approaching the 2 1/2-year low of $1.1444 reached on Monday, with Britain also entangled in the energy crisis, despite new prime minister Liz Truss’s plans for a massive support package.

The US dollar index, which measures the greenback against six major peers, hit a fresh 20-year high of 110.69.

The onshore yuan weakened to a low of 6.9808, the softest level since August 2020, even after the central bank continued to set the currency’s official guidance firmer than market forecasts. Disappointing Chinese trade data further dented sentiment.

The Philippine peso sank to a record-low 57.32 per dollar.

Cryptocurrency bitcoin slumped to the lowest since June 19 at $18,540, extending a 5pc tumble from Tuesday.