Rupee continues to take a battering 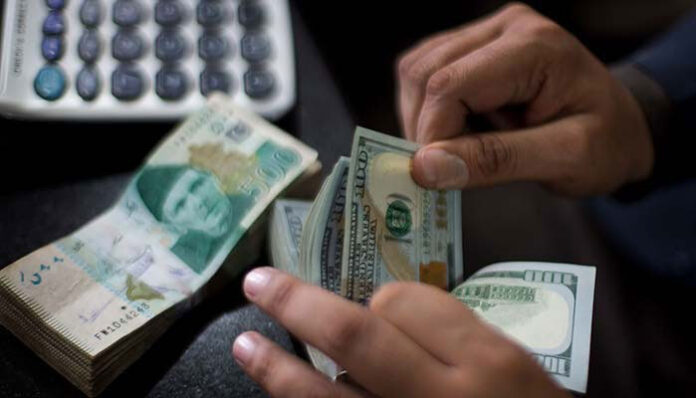 LAHORE: Pakistan rupee on Monday depreciated by Rs1.64 against the US dollar in the interbank trading and closed at Rs229.82; against the previous week’s closing of Rs228.18.

The local currency closed at Rs229.82 per dollar, data shared by the State Bank of Pakistan (SBP) showed. This equates to a depreciation of 0.71 per cent.

According to the Forex Association of Pakistan (FAP), the buying and selling rates of dollars in the open market were recorded at Rs234 and Rs236 respectively.

The Japanese Yen gained one paisa to close at Rs1.61, whereas an increase of Rs3.34 was witnessed in the exchange rate of the British Pound, which was traded at Rs268.59 as compared to its last closing of Rs265.25.

The exchange rates of Emirates Dirham and Saudi Riyal increased by 43 paisa each to close at Rs62.57 and Rs61.15, respectively.

The local currency’s decline can be attributed to several factors including an increased import bill due to floods, smuggling, and friendly countries back tracking on their promise to loan Pakistan some money once it had received a loan tranche from the International Monetary Fund (IMF).

According to a report by Dawn that quoted Exchange Companies Association of Pakistan (ECAP) General Secretary Zafar Paracha, “They appear reluctant to do so because of the political situation, corruption and our past record of not returning money”.

“Our expectation that the rupee would gain Rs10-20 after IMF deposit was received did not happen. We received $1.16bn from the IMF which is not adequate,” the ECAP official said.

On the other hand, the difference between the Interbank and open market is creating an incentive for the foreign currency accounts (FCY) to withdraw US dollars and sell into the open market. Whereas ultra-low interest on FCY accounts is not helping in attracting fresh deposits, according to Tresmark.

The rupee has been losing ground against the dollar since Sept 2. It fell by Rs9.2 during the last week to close at Rs228.18.

According to financial data and analytics portal Mettis Global, the rupee’s value has declined 26.37pc over the last 52 weeks. It fell to a record low of 239.94 on July 28.