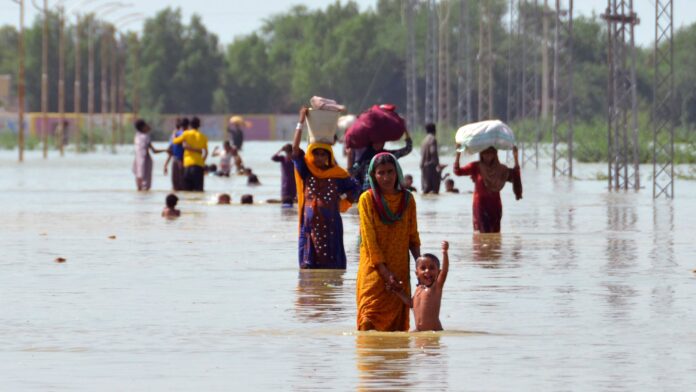 KARACHI: Recent flooding in Pakistan has upturned the lives of close to 70 million people, affecting 16 million families. The Secretary-General of the United Nations, who has been monitoring the relief efforts, has termed the natural disaster ‘’unnatural’’ — citing climate change as an aggravating factor in the mass-scale suffering caused.

Already struggling with high inflation and still battling the COVID-19 pandemic, the flooding has only exacerbated the challenges facing Pakistan’s very poorest people.

The crisis has further highlighted the need to deliver humanitarian aid through an efficient and transparent process, where technology can be used as an enabler to ensure implementation, distribution and, more importantly, utilization.

Digitalization can be an effective tool for dealing with humanitarian crises such as the one unfolding in Pakistan. Today, we have the required resources, infrastructure and technology available and in place to activate initiatives like the World Bank’s innovative “financial inclusion” scheme and Pakistan’s “Asaan Mobile Account” (AMA) Scheme, which has set up millions of Pakistanis with bank accounts, allowing them to receive emergency fundings in the ongoing flooding crisis.

Launched in Pakistan under the slogan Aam Aadmi Ki Azaadi — Urdu for “the common man’s independence” — the AMA scheme has already onboarded over 5.5 million accounts.

Notably, 44 percent of those who have signed up for the AMA scheme in Pakistan were women, despite them making up only 18 percent of overall bank account holders.

Pakistan ranked 145th worldwide — out of 146 countries analyzed — in economic participation and opportunity in the World Economic Forum’s Gender Gap Report 2022. When it comes to the position of women in the economy, there is much work to do be done. While it is making progress, and Pakistan is “near equal rights” when it comes to access to financial services, there remains a significant economic inclusion gap between males and females in the countries.

The AMA scheme goes some way toward rectifying this and bringing the country’s 110 million women to economic and financial equality. Research suggests that encouraging financial inclusion is an essential tool for lifting people out of poverty — and so schemes like AMA, which enfranchise women into the system, can have far-reaching and long-lasting benefits to women and wider society.

In times of crisis, as Pakistan is experiencing now, this is critically important — everyone should have the means to access emergency government funds.

This has been largely possible due to the interoperable infrastructure where the USSD (Unstructured Supplementary Service Data) platform — similar to SMS texting — on which AMA is built does not require internet connection or a smartphone to access financial services.

The many-to-many USSD platform is also unique in that many financial institutions as well as telecom players operate as equal actors in its infrastructure. This robust foundation ensures that in situations of emergency relief, the distribution and allocation of capital is based on transparency and that financial aid is not siphoned off to the wrong places — or the wrong hands.

In effect, the AMA scheme allows Pakistanis or their communities — many of them women — who are either cut off from the outside world by flooding or displaced by it to access emergency funding.

In flood-ravaged Pakistan, the responders supporting the relief efforts can simultaneously prepare lists of effected individuals, gathering details such as identity numbers of the impacted families, and work in coordination with the authorities managing the national response to the disaster. This ensures that all those who need emergency funding can open accounts and access it quickly.

The government can instantly and credibly disburse funds in a transparent manner with real-time visibility and accountability.

Agent interoperability also assists with the flood response and force-multiplies the benefits to those affected by flooding, allowing them to readily access multiple agents of any of the participating banks and telecommunication providers.

The AMA scheme also provides the government with much-needed data on the disbursement of its relief funds — and this makes it a valuable replicable model for across the developing and developed world.

A replicable model for payments

The transparent collection of data and wider disbursement system is a “made to order” solution for any government seeking to transfer emergency cash directly to its citizens. Money can be sent directly to the victims of natural disasters, as Pakistan has done with its flooding victims, but there are many other potential use-cases.

Payments to refugees, for example, could benefit from this model. With very little in the way of expensive hardware required on either the government or recipient end, people fleeing war-torn areas like Ukraine would be able to receive money sent either from their home or host countries. In turn, those countries sending the money receive important data on numbers of refugees.

Schemes like Pakistan’s AMA initiative allow anyone, even the very poorest, the financially excluded and minorities to open bank accounts and, if needed, access emergency funding.

As the world faces down natural disasters, conflicts and other instability, simple but effective ways like this that guarantee financial inclusion will allow some of the world’s most vulnerable to weather challenging times.

The sole makers of security papers in Pakistan, SEPL is doing well but it can do even better
Read more
Automobile

On the precipice of having their registration approved, electric rickshaws now face an uphill battle to win over everyone
Read more
- Advertisement -