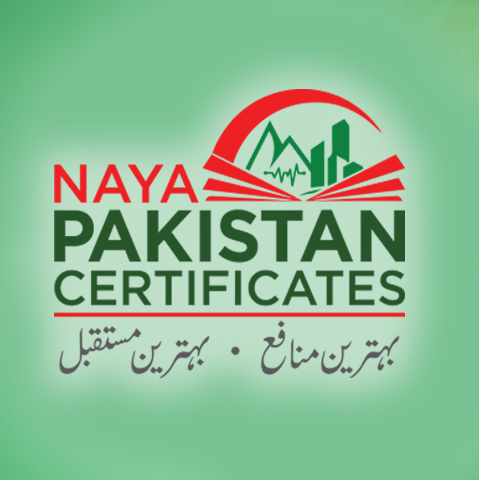 The Naya Pakistan Certificates (NPCs) that had seen net inflows up until March 2022 have seen $659 million withdrawn in the past six months. Introduced as a fixed income security offered digitally by the Government of Pakistan, the certificates saw great popularity but have seen more withdrawals than inflows since June.

Overall outflows surpassed inflows leaving $763 million in September 2022. This means that more withdrawals have been seen in the last six months than net inflows in the previous three quarters.

Breaking down the data

Cumulatively, between June 2021 and March 2022, the net inflow of investment was $614 million. However, after March 2022, the trend has reversed and in both quarters following, withdrawals can be seen from the certificates.

In June 2022, there was a 33% withdrawal whereby the net outflow of funds was $470 million, and in the next quarter, the withdrawal amounted to $190 million bringing the total investment in the NPCs to $763 million. The total withdrawal during these two quarters is equivalent to $659 million which means more funds have been withdrawn in the last two quarters than were deposited in the previous three quarters. 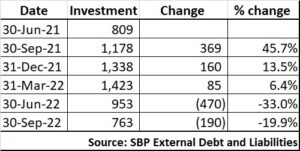 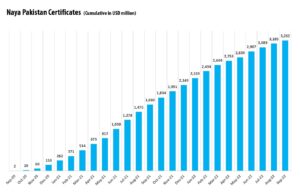 As per the data releases, it can be seen that inflows in NPC have increased every month since September 2020 when they were launched. However, the pace of investment has slowed down to a more sustainable level by October 2021, following which the growth rates have been single-digit. This shows that indeed outflows have exceeded inflows for the NPCs. 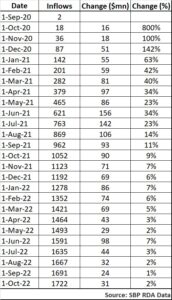 Did the revision in rates not help?

While the SBP releases this data quarterly, it is likely that they monitor it on a regular or live basis. Seeing an increase in withdrawals and a decrease in inflows; the SBP and the Finance Ministry might have increased the returns on the certificate to make them attractive once again.

In September 2022, the Government of Pakistan, Finance Division (external Finance wing) notified a revision in the rate of return in PKR-denominated NPCs and also revised downward the minimum denomination of NPCs.

There are possible reasons behind this net outflow. One could be that investors chose not to reinvest in NPC upon maturity. This could be because they found another lucrative avenue of investment, needed the funds, or had any personal reason.

“With the soaring inflation globally, we are witnessing aggressive monetary tightening by the majority of the central banks. Accordingly, the returns offered on NPC are not competitive anymore and the political instability is also dampening The investors sentiment leading towards withdrawal from NPC,” says Tahir Abbas, head of Research at Arif Habib limited.

In the past, former governor Dr. Reza Baqir in response to a question by Profit explained that advertising was an important factor influencing RDA account openings and inflows. He said, “When TV ads and overseas means to advertise are used, more accounts are opened, when stopped the pace slows down.”

Previously, sources at commercial banks working on RDA product development said that the SBP is pushing banks to engage customers more than ever and are encouraging banks to dedicate more resources to the marketing of RDA. The same sources are now claiming that the push from the central bank on the matter has moved to more serious topics such as foreign exchange-related issues.

Another possible reason for the net outflows could be a change in the government. While a preference for a political party may be the reason behind the withdrawal, it is important to note that changes in government bring instability which hurts investor sentiment. With Pakistan’s shaky fundamentals and struggles with the International Monetary Fund (IMF) review, investors may be reacting.