The grey economy of our black tea

Those humble chai dhaabas  are worth Rs 1,450 crores in import duty and sales taxes alone 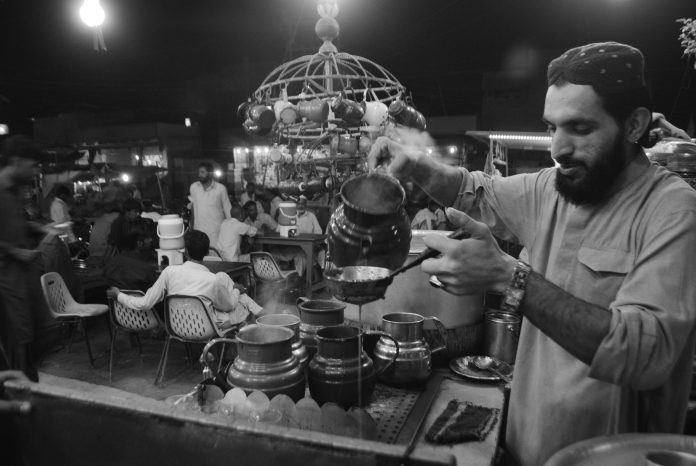 Drawing attention of his friends, Naveed Pasha expresses his frustration over the poor state of education in the city at his favorite place to discuss the country’s social issues: a local teashop around the corner of a busy street in Mehmoodabad, a populated neighborhood in Karachi. Another group sits next to them discussing business in Pashto, as two other men on the adjacent table indulge in family talks in Seraiki over a cup of tea. This local teashop or dhaaba, a common name for such businesses, also buzzes with cheerful voices of youth every evening.

Coming from diverse backgrounds and age groups, all these people have one thing in common: they are the main customers of the booming business of dhaabas, the largest buyer of unpackaged or loose tea. “People don’t have enough space to entertain their guests at home so they host them at tea shops,” Hidayat Sahir, a regular visitor at the aforesaid dhaaba said, adding that such shops are like guest houses.

Tea is a popular low-cost drink in Pakistan, the second largest importer of the commodity after Russia, and the largest consumer in South Asia on a per capita basis, which stands at roughly 1.005 kilogram.

People consume this hot beverage thinking it relieves fatigue mainly because of the caffeine it contains – whether it actually does or not remains debatable. What is certain is the fact that this beverage is in high demand in our society: the mushrooming of dhaabas, mostly filled to their capacity, in every street and corner of the city is an evidence of that.

These dhaabas and other commercial teashops have been growing in numbers across the city, yet they remain almost entirely undocumented: they are the major buyers of the unpackaged tea, which accounts for more than a third of the total tea market but doesn’t come under the tax net. In other words, the tea consumed by Pasha and his friends does not exist in the country’s GDP – the importers of this tea did not pay any duties nor did consumers pay any sales tax on the same.

According to industry estimates the per capita tea consumption of Pakistan stands at 1.005 kg, translating to a market of 201 million kg based on population of 200 million. By contrast, the country’s legal imports are much lower.

According to Pakistan Tea Association (PTA), the country imported 151 million kg of black tea worth Rs 4,400 crores or $420 million at the rate of Rs290 per unit in 2015. This means approximately 50 million kg made it to Pakistan through illegal channels – in other words the smuggled or illegal tea imports is 33% of the size of the country’s legal imports.

If one applies 11 percent import duty and 17 percent sales tax to the tax-evaded tea, the government lost about Rs 1,450 crores or $140 million in potential revenues during 2015. This translates to 76% of the budget deficit (Rs 1,900 crores) of Pakistan International Airlines, the loss-making state-owned entity, reported for nine-month ending Sept, 2016 – the amount doesn’t include impact of 30 percent corporate income tax paid by the packaged industry on its earnings and tax deduction from employees salaries.

“Our tea is exceptional in taste chiefly because it is imported from Afghanistan,” Abdurahim Kakar, owner of a Dhaaba in Mehran Town, told this correspondent while serving a customer with a smile. Kakar is oblivious to the fact that Afghanistan itself is not a producer or exporter of tea nor does it exist in the list of 23 countries which export tea to Pakistan.

“Almost all of the tax-evaded tea is currently coming through Afghan Transit Trade,” Unilever Foods Pakistan said referring to misuse of the bilateral trade agreement between Pakistan and Afghanistan.

Once the prices in international market go up, more and more smuggled tea starts entering the Pakistani market, the maker of Lipton said. Owing to the misuse of the Afghan Transit Trade, the importers benefit from cost saving from the various taxes that are levied by the government along the way making it significantly cheaper for them to bring the tea to Pakistan, it said.

“By avoiding import duty, sales tax and income tax, traders of unbranded tea enjoy an unfair advantage of approximately Rs70 to 80 per kg”, PTA’s Chairman Shakeel Jan says. In other words if a consumer buys one kg of packaged tea from legitimate brands, such as Tapal or Lipton, he will have to pay Rs520 as opposed to Rs450 per kg for the same quality of unbranded tea.

While major buyers of loose tea are local teashops, also known as Quetta hotels or dhaabas, unpackaged tea is also becoming popular at domestic level as a significant number of households continue to buy and consume the unbranded tea.

“People like loose tea mainly because it is cheaper than branded tea, and in many cases has a good taste,” says Zain Asif, a vendor of unpackaged tea in Babar Market, one of Pakistan’s largest markets located in Landhi, a populated low-income neighborhood in the eastern outskirts of Karachi.

Asif said people like mixture of different categories but he keeps asking them about the tea they prefer. “A customer yesterday informed me that he buys from a big tea store in Saddar, today I brought that tea. We can extend our business only through this way as we don’t have resources like big companies to reach large number of people,” he said.

“Half a kilo tea with color,” a customer asks Asif interrupting the conversation.

“This color is health hazardous but we have to meet the demand as customer is the boss here,” the retailer explains voluntarily anticipating a question about tea adulteration. “If we do it ourselves, it will be called milawat (adulteration),” he added explaining why they have to add the color.

Perhaps catering to the very taste of his customers is what helps Asif’s business flourish. However, this is not enough to cater to a bulk of customers from his area who still travel 24 kilometers west to the downtown (Saddar) for buying their specific taste.

“I tried different kinds of teas and then settled on taste of a tea retailer in Saddar,” said Salman Khan, a resident of Landhi No. 4 and a consumer of unpackaged tea. “We use unbranded tea primarily because of its taste.”

Taste may be one of the attractions for the subscribers of loose tea, but industry sources say unpackaged tea loses some of its taste because of inefficient supply chain. Tea smuggled from Afghanistan goes through Chaman and Spin Buldak, to come back to Pakistan. This whole traveling process takes 15 to 20 days, which reduces the quality and taste of tea.

Even if it loses some taste and aroma during transportation, the price factor seems to more than make up for the loss in the quality of the unpackaged tea.

“Loose tea is cheaper than branded tea. We are family of four, our usage of tea is approximately one kilogram; sometimes a quarter increases,’’ Khan said implying the unpacked tea saves him on costs.

Khan’s loyalty for that particular tea can be judged from the fact that he doesn’t mind traveling to a large retailer in Saddar where he often has to wait for his turn.

Unbranded tea business works on word of mouth, Khan says recalling his father-in-law had informed him about the shop. Now his sister, younger brother and his in-laws use the same tea.

While they continue to sell unpackaged tea, nearly half a dozen traders of unbranded tea polled by Pakistan Today have a typical view about tax evasion by the grey market.

“We pay taxes everywhere; via taxes on petrol while transporting tea and government has also put indirect taxes on everything from mobile phone card to utility bills,” Asif, the tea vendor at Babar market said responding to whether he pays any taxes.

Even consumers share similar views when ask about this growing but undocumented market of loose tea. “It is the responsibility of the government [to educate people]. How would we know that a vendor evades taxes. If they do this, it’s a loophole in the system,” Khan said on the subject.

The government can give level-playing field to the legitimate tea vendors by reducing tax and introducing favorable policy decisions, Shakeel Jan, PTA’s Chairman said. The government has imposed duties of up to 52 percent per kilogram of tea, he said, which makes the branded tea more expensive; as a result consumers switch to cheaper alternate: the unbranded tea.

Giving an example, he said sales tax on tea was reduced from 16 percent to 5 percent in June 2012. However, this was reversed to 16 percent shortly after by the then government to meet revenue shortfall.

“The government should have given some time to their policy decisions to demonstrate their impact on tea smuggling. Two months were not enough to check the result of reducing taxes on tea,” Jan said.

Be it taxes on tea, mobile phone service or cigarette, the incumbent government’s inability to go after tax evaders and heavy reliance on indirect taxes remain a topic of much discussion among masses. However, Pasha and his friends find a temporary relief, if not a complete escape, from the burden of indirect taxes in a cup of tea. They leave the dhaaba with a lot of incomplete discussions about “poor state of basic needs (education, healthcare, and transport to name a few), tax evasion and Panama leaks only to resume the next day — oblivious of how they themselves are contributing to this vicious cycle.

LAHORE: Non-profit policy think tank Institute for Policy Reforms (IPR) Saturday questioned the sensibility of the targets and claims made by the government in...
Read more
ECONOMY

PESHAWAR: The business community here on Friday termed the federal budget for the fiscal year 2021-22 as ‘balanced’, ‘growth-oriented and ‘pro business' asking the...
Read more
ECONOMY

ISLAMABAD: The federal government has planned to borrow Rs2.747 trillion (over $16 billion) gross foreign loans in the next fiscal year to finance the...
Read more
ECONOMY