Ricult: Cutting Out The Conventional Middleman 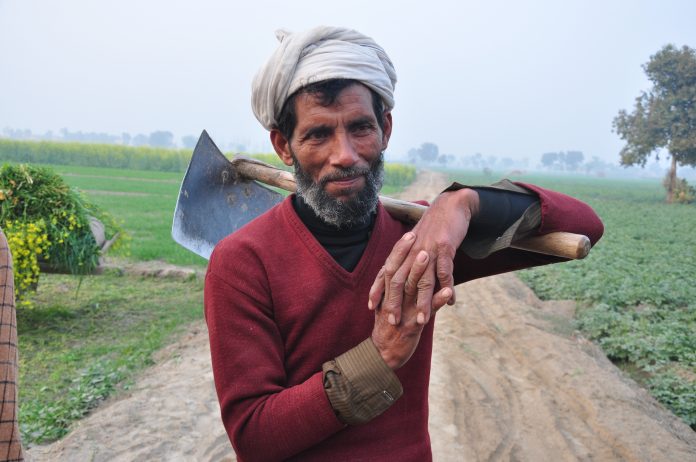 Put yourself in the shoes of a man who owns very little land, owes a huge amount of money to middlemen and small financial institutions, is forced to sell his produce to his creditor only, and probably has a large family to cater to whose livelihood essentially depends on favourable climatic conditions for crops in a given year. That’s what it is like to be a smallholder farmer in Pakistan, and almost all developing countries – living under perpetual debt, fear and exploitation.

The word smallholder is pretty much self-explanatory – farmers owning a small amount of land (10 acres or less) can be categorized as smallholder farmers. But does that mean that their contribution to the agriculture sector is small too? And, more importantly, what does it mean to be a smallholder farmer in a developing country like Pakistan?

Let’s get some facts straight. Census is being held after some eighteen years and most people estimate Pakistan’s population to be at 200 million people. Out of this 200 million, almost 40 million people are farmers, of which, 60 per cent or 24 million are smallholder farmers.

The Consultative Group to Assist the Poorest (CGAP) launched the Smallholder Households Financial Diaries (the “Smallholder Diaries”) in June 2014 to track the cash flows of 270 households in Mozambique, Tanzania, and Pakistan over one year of their lives. CGAP is a global partnership of 34 leading organizations that seek to advance financial inclusion, and is housed at the World Bank.

In the words of the ever-useful Pakistan Bureau of Statistics (PBS), agriculture accounts for almost 24 per cent of the gross domestic product (GDP), employs half the labour force and is the largest source of foreign exchange for the country. According to the UN Food and Agriculture Organization (FAO), approximately 80 per cent of the food consumed in the developing world is produced by smallholder farmers.

In such a situation, a responsible government would attach immense importance to the welfare of this largely unregulated sub-sector of the economy: the smallholder farmers, who happen to be the actual backbone of the economy in Pakistan.

A vicious circle of exploitation

There is a 7.5 billion dollar agriculture credit demand in Pakistan. Around 3 billion dollars of this demand is catered to by the financial institutions and banks. The remaining gap between the demand and supply of agricultural credit is filled by Aarti (middlemen) – people living in villages looking to invest their spare capital in a smallholder’s farm and thus earn high profits.

Meet Muhammad Akram, a forty-year old small farmer based in district Kasur who owns 8 acres of land. Donning a thin cotton shawl, Akram walks through his fields and explains the enigma of small farmers’ plight in Pakistan. He grows rice, potato, wheat and corn on his land.

“We don’t have the money to purchase inputs for farming,” says Akram, who has joined a group of four other farmers to get credit from Ricult Pakistan, a fintech aiming to solve small farmer’s’ problems.

A smallholder farmer does not have the resources to buy farming inputs like seeds, fertilizers and pesticides etc. He owns a small amount of land, which, if put up as a collateral for a small loan from a bank, runs the risk of robbing the farmer of the only thing he has – land.

So, what does he do if borrowing from a bank is not possible? He pays a visit to the wealthy Aarti in his village, somebody who would be willing and able to lend him some money, in return for a profit. All seems fair and good till both the gentlemen sit down to work out the details of the agreement.

The middleman sells cheap and low quality farming inputs to the smallholder farmer on credit at exorbitant rates. On this lent amount, he charges an annual markup of 60 per cent to 150 per cent, a variance which is subject to his generosity.

But it doesn’t stop here. Come harvest time and the creditor takes all the produce from the farmer at a lower rate than the market rate, sells it to the market at the market rate, and then deducts the amount owed to him by the farmer to return the remaining amount to him. In most cases, the middleman refuses to release the full amount he owes to the farmer, thereby exploiting the farmer even further.

And what recourse does the middleman adopt when a natural disaster like floods hit the crop? Lend some more to the farmer and make him pay the outstanding amount next year. Always keeping him dependent and entrapped in the never-ending cycle of falling profit margins and rising debt.

In fact, farmers dread the middlemen so much that Akram reiterated time and again about the Aarti’s behaviour being in complete sync with morality.

“The Aarti doesn’t do anything wrong. Please don’t write against him as he is our benefactor,” says Akram.

Fintech startups are shaping today’s world, challenging the incumbents to adapt to the changing dynamics on the back of technological advancement.

One such pertinent example is Ricult Pakistan, a Fintech startup that aims to end the exploitation faced by smallholder farmers in Pakistan by providing easy access to low-interest loans without collaterals, selling high quality farming inputs at below market prices to the farmers, linking the farmers with buyers who can directly buy the produce and providing agronomy services such as soil testing.

“Ricult Pakistan is the first of its kind service in the world,” claims Usman Javed, CEO and cofounder of Ricult Pakistan. Founders of Ricult Inc, the VC-funded parent company of Ricult Pakistan, comprises of MIT graduates with experience in diverse fields such as credit risk modeling, machine learning, business process optimization and agriculture marketing.

Ricult Pakistan’s business model is similar to the middleman’s way of doing business except that the interest rate is only 22 per cent, while the inputs are also 10-15 per cent cheaper than what the middleman sells them for, in addition to being delivered to the farmer’s doorstep for free. It manages to sell these inputs at lower prices due to its partnerships with leading companies like Fauji Fertilizer Company and Guard Rice, among a few others.

On top of that, Ricult does not buy the produce from the farmer, but instead links them to its strategic partners like Engro and other food processing companies that directly buy the harvest if the farmer agrees. No compulsion.

Farmers owning ten acres or less are asked to form groups of five to ten people to diversify and reduce the credit risk involved.

“We have run a pilot already, wherein we lent almost 80,000 dollars to 150 farmers in Kasur region of Punjab,” says Usman. He further reveals that all the farmers who had completed their crop cycle have returned the money.

Ricult Pakistan has targeted the Kasur region for a number of reasons: it’s one of the most fertile lands in Pakistan and hosts a breed of farmers which are progressive in nature and already indulging in modern farming techniques – something which Ricult is bringing and promoting in the country.

But one has to ask: how does it ensure that the farmers don’t default on the loans?

“We believe that all financial institutions spend most of their efforts in getting their money back after lending it, while we worry about  who’s the right person to lend to,” says Usman. Ricult Pakistan has developed a credit scoring tool based on different algorithms which can ascertain if a farmer will pay back or not.

“After the farmer fills our application form, he is informed within 25 minutes whether he would be sold inputs on credit or not,” says Usman, while adding that the tool is still in the making and would be fully functional by May 2017.

Ricult Pakistan is one of the three winners of Fintech Disrupt 2016, a competition organized by Karandaaz Pakistan in collaboration with Bill & Melinda Gates Foundation and Lahore University of Management and Science’s Centre for Entrepreneurship.

Ricult will receive a grant of up to $100,000 over a period of six months as the winning prize, tied to the attainment of certain milestones set by the investors.

“Karandaaz Pakistan has not linked the disbursal of the grant with revenue or profitability as key performance indicators (KPIs) since it would have been unrealistic to achieve those in six months,” says Usman.

The targets and tasks set by the investors focus on infrastructure building, team building, marketing and building technological platforms. At the moment, Ricult has only 12 employees in Pakistan but it plans to take it up to sixty employees by next year, which would be made possible by the funding it would get from Karandaaz.

“We aim to scale up to one thousand farmers next year and breakeven by 2018,” says Usman, adding that the scale would be achieved successfully once their technological platform is fully developed.

Over 45,000 farmers exist in the seven union councils that form the initial target market of Ricult. Expanding to other parts of the country is definitely on the table but only once they have successfully covered the farmers in these union councils.

“We have been approached by farmers, NGOs and even feudal lords from Sindh and other parts of the country who are interested in working with us,” says Usman.

Ricult Inc has global plans, and aims to simultaneously launch in China and Thailand in mid-2017. Two of the founding members of Ricult Inc belong to each of these countries, and also have a farming background.

A silver lining to the walked-upon smallholder farmers is the fact that the Punjab Agriculture Department has also invited Ricult to learn more about its aims, objectives and the way it would help the smallholder farmers. Although no agreement or partnership has been reached with any government agency, Ricult Pakistan is being encouraged by all stakeholders (except the middlemen, maybe) for it promises a brighter future for so many distressed people in the country.

“People say mobile phones are the future of this country, I say it’s the present; it is already happening around you,” says Usman, while stressing on the significance of rising internet users in the country and the potential it holds to solve their issues.

How it would cover the entire sector of smallholder farmers in Pakistan remains to be seen, and whether it would provide a sustainable benefit to the farmers also remains to be seen. Because 45,000 farmers getting an easy solution while the rest still suffer from the same old exploitation is not really a win-win situation for the sector.