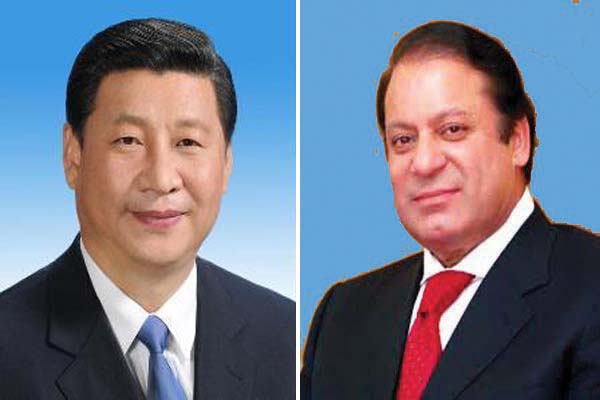 Prime Minister Muhammad Nawaz Sharif Saturday said that his government was making all out efforts for active implementation of China Pakistan Economic Corridor (CPEC) though it had made good progress in execution of energy and infrastructure projects.
“China-Pakistan Economic Corridor is a core component of your visionary initiative of the “One Belt-One Road.” We sincerely appreciate your commitment and leadership for the realisation of CPEC projects,” the prime minister remarked in his meeting with President Xi Jinping at Great Hall of China, on the sidelines of the ‘Belt and Road Forum for International Cooperation.’
The Forum is being hosted by Chinese government on May 14-15 being attended by 29 heads  of state and government besides delegates from around 130 countries. On his arrival at Great Hall of China, the prime minster was received by President Xi and both the leaders shook hands.
During the meeting, the prime minister was accompanied by Chief Minister Punjab Shahbaz Sharif, Chief Minister Sindh Murad Ali Shah, Chief Minister Khyber Pukhtunkhwa Pervaiz Khattak and Chief Minister Balochistan Sanaulllah Zahri. Besides Planning Minister Ahsan Iqbal, Finance Minister Ishaq Dar, Railways Minister Khawaja Saad Rafiq, State Minister for IT Anusha Rehman and Advisor to PM on Foreign Affairs Sartaj Aziz also comprised the prime minister’s delegation.
President Xi Jinping was also accompanied by his high level nine-member delegation.
The prime minister, who earlier met his Chinese counterpart Li Keqiang also stressed for accelerating the implementation of projects in Gwadar and establishment of Special Economic and Industrial Zones.
Prime Minister Sharif said the composition of his delegation represented the strong bonds of friendship between the two countries.”The presence of all four provincial chief ministers symbolises the broad-based support in Pakistan for cooperation with China and the China-Pakistan Economic Corridor,” he remarked. He said Pakistan stood with China for promotion of President Xi Jinping’s visionary initiative of One Belt and One Road (OBOR)
The prime minister congratulated President Xi on successful holding of the Belt and Road Forum and said that the participation of a large number of world leaders in Chinese capital was a testimony of his leadership and China’s growing stature in the international community.
The prime minister said that Pakistan-China friendship enjoyed popular support in Pakistan and high-level exchanges were indicative of the bilateral fast-growing bilateral relations. However, he also stressed the need to sustain the momentum with a view to further strengthening of this relationship.
In his remarks, President Xi Jinping welcomed the prime minister and his delegation for attending the Forum. He expressed his satisfaction over the pace of growing bilateral ties and resolved to cement the ties further by enhancing cooperation in multiple spheres.
He said that the two countries had more potential to strengthen bilateral cooperation vis-  a-vis implementation of CPEC and  other regional connectivity projects.
- Advertisement -
Facebook
Twitter
Linkedin
WhatsApp
Email
Previous articleGovt planning to reverse ban on new power plants using imported fuel
Next articlePakistan and China sign multiple MoU’s for CPEC infrastructure projects