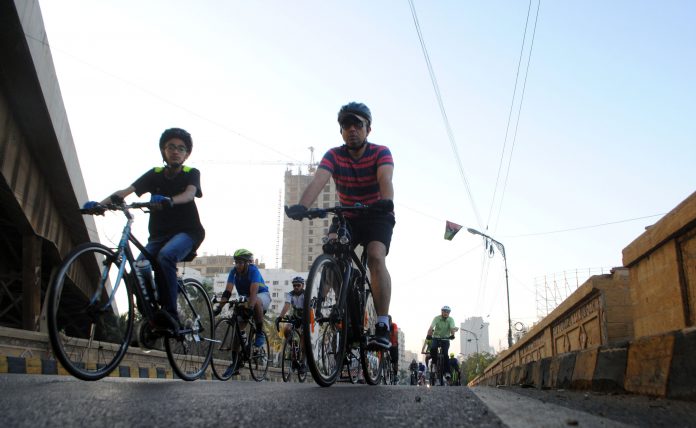 Just a kilometer ahead of Native Jetty Bridge on the left side of the road opposite KPT port, the historic Jackson Market is located. Established in late 1970’s it is Famous for its second hand, imported and reasonable goods.

It was Sunday and Karachi had witnessed a heavy rainfall the day before.. Mostly businesses in the city were closed due to the expected rain again. However, for Jackson Market Sunday is that time of the week when the prospect of sales is highest.

The market street was damp and remains of the previous day’s rain stood in form of small puddles, which allowed walkers to test their hop scotch skills but did not stop the visitors or the owners to carry out their Sunday shopping spree.

In the second lane of the left side of the market, a metallic, rusty gate was half opened. This gate directs towards a small alley and a tall bearded man was welcoming his customers inside the gate where his shop is located in the first room on right.

‘’This [cycle] is for Rs 28,000,’’ Ghaffar Khan, standing in his small bicycle shop, told his customer. The tall, bearded Khan is in his early 50s and runs the second hand yet ‘’imported’’ – as he emphasizes – bicycles’ business since the last 16 years in Jackson Market, Karachi.

The 144 sq feet room which Khan is using as his bicycle showroom has recently started to fill with customers, a scene which according to Khan was hardly seen a couple of years back. He says, ‘’Now young and educated people have started to show interest in cycling, they have come to know that there is a cycle market near Kemari and they frequently visit us.’’

While we were interviewing Khan who is famously known has Ghaffar Mama – a term used for uncle – about four to five customers visited his shop in less than 10 minutes. Some were told that their picked item had been sold while others explored through the various types of cycles that Khan displayed, all in all Khan was having a rush hour on this wet day – the reason why all of the market was opened.

Khan’s shop is one of the many in Jackson Market that have recently started to sell a greater number of cycles due to growing interest of Karachiites in cycling. This, some say, is on the back of improved law and order conditions while others claim it’s because of the formation of various cycling groups in the city.

Critical Mass Karachi (CMK), Chain Reaction and others are famous cycling groups recently formed in Karachi. The idea behind these groups was to mainly promote cycling as an alternative and healthy commuting mode as well as a healthy lifestyle. However, over time, these groups proved out to be much more useful than the planned aspect. They have helped in reviving the cycling tradition in the city and it’s becoming common for Karachiites to witness cyclists roaming around in the city.

Such groups initially comprised of a few people but now they have expanded up to hundreds of members who regularly cycle – especially in Sunday’s group rides. The same people are now Khan’s potential customers as well. ‘’If someone buys a cycle from me and likes it, he’ll tell others about it. It then brings more business,’’ he explained.

Khan thinks that both the cyclists groups and a better law and order situation helped him improve conditions of his otherwise uncertain business. “People were previously afraid to come this far into the market but that has changed now and they are more confident when coming to Jackson,’’ said Khan while pointing towards his customers.

The various cycles – out of which Hybrid and Road Bikes are the most sought after – range within the price of Rs 10,000 to Rs 50,000 and sometimes more. Khan says, it all depends on the customer and how much he wants to spend on a piece, thus the market provides him with the best according to his requirement and pocket.

Seeing the growing interest in cycling, various new businesses have also popped up to cater the cycle enthusiasts of the city. Cycle Wala (an online shop), Bikestan and Bike Concept (shops in Defence and Clifton) are all the groups of cycle riders who converted their passion into a business seeing the demand and growing cycling trends.

According to Schallim Reuben, Cycle Wala’s founding member – a group that sells and rents second hand cycles – it was an idea that emerged in the minds of three friends who had joined CMK for cycling and saw the growing number of members every day. Eventually the group started its operations in the beginning of this year and so far their response has been positive enough to keep them motivated to grow it further.

‘’Our selling is directly proportional to our stock i.e. if we have more bikes [in-stock] then more are sold,’’ said Reuben regarding the monthly sales. On an average, Cycle Wala sells 50 percent of its stock in a month and for rentals – given the weather conditions – all cycles are pre-booked on Sunday rides for a rent of Rs 500.

For Reuben and his group cycling is still not a mere business opportunity, they intend to motivate people towards cycling for health and environmental reasons as well. Reuben says that people should indulge more into cycling which will not only promote a healthy lifestyle among the people but also help to prevent the ever increasing traffic in the city.

On the other hand such businesses are competition for the shops in Jackson Market, however, both groups claim to have separate target customers due to the variation in price range, quality and location.

Khan is confident about his market segment which comprises of mostly middle economic group of Karachi, he says, ‘’They [Bikestan] offer Mountain Bikes for Rs 35,000 whereas we offer a Hybrid for Rs 25,000; that is the difference.’’ Khan also mentioned that the quality of cycles varies too and the people who want to spend more might go to Defence and Clifton shops as they are offering brand new cycles but Khan’s customers will always come to him for comparatively reasonable yet well maintained cycles.

Only time will determine where the cycling trend will head, as of now, Khan is happy with the business growth and plans to expand his business further with the Rs 2,000 to Rs 3,000 profit he earns on each bicycle sold. While the cycling groups continue to paddle their way in the city, Cycle Wala and Bikestan have found a business in health awareness – a two in one venture.

Everything standing between the PCB and a women’s PSL

With the deck already stacked against them, advertisers and marketers cannot seem to look beyond a lack of players - something that would be fixed by such a tournament
Read more
FEATURED

Sons, bribes, perks, and jobs – the murky world of corporate lobbying in Pakistan

Profit tells the story of how corporate lobbying has been done in Pakistan, and how this has led one man to formally capitalise on it
Read more
- Advertisement -