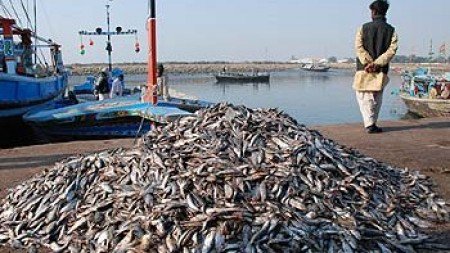 The major buyers are China, Thailand, Malaysia, Middle East, Sri Lanka, Japan etc. The sources said fishery plays an important role in Pakistan’s economy and is considered to be a source of livelihood for coastal inhabitants. Apart from marine fisheries, inland fisheries (based in rivers, lakes, ponds, dams etc.) is also very important activity throughout the country.

Fisheries’ share in Gross Domestic Product (GDP) is 0.41 per cent but has a value addition in export earnings. During 2016-17 (July-March), total marine and inland fish production was estimated at 520,000 tons out of which 375,000 tons was marine production and remaining catch came from inland waters.

Whereas the production for period 2015-16 (July-March), was estimated to be 501,000 tons in which 368,000 tons was marine and rest was produced by inland fishery sector. The sources said to improve fisheries sector a number of initiative were being taken by federal and provincial fisheries departments which included inter-alia strengthening of extension services, introduction of new fishing methodologies, development of value added products, enhancement of per capita consumption of fish, and up-gradation of socio-economic conditions of the fishermen’s community.

The government also arranged training of around 2,455 fishermen and fisheries related personnel on different aspects to bring high quality products which fetch higher price in market. These trainings were also aimed at reducing post-harvest losses on board fishing vessels and were imparted on hygiene, deckhand, navigational electronic equipment, HACCP, modern fishing techniques etc.

Moreover, the sources said to enhance export of seafood products a model shrimp farm in District Thatta, Sindh has been set up by Fisheries Development Board with funding from Export Development Fund (EDF) to enhance supply of raw material for seafood industry in Pakistan. They said in order to enhance seafood exports and curb smuggling of seafood to Afghanistan and other countries from Peshawar, four new development projects are being implemented. These included establishment of Regional Office & Testing Laboratory of Marine Fisheries Department at Peshawar, establishment of Regional Office & Testing laboratories of Marine Fisheries Department at Gwadar, upgradation and Accreditation of Quality Control Laboratories for Environmental Contamination and reactivation of Hatchery Complex for Production of Fish and Shrimp Seeds.

The sources said under Strategic Trade Policy Framework (STPF) 2015-18, matching grant of up-to a maximum of Rs. 5 million for specified plant and machinery or specified items has been given to improve product design and encourage innovation in Small and Medium Enterprises (SMEs) and export sectors of leather, pharmaceutical and fisheries. The EDF Board also approved Rs. 96 million for establishment of Pen Feh farm of sea bass and groupers along coastal belt of Sindh.