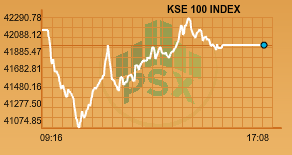 The phrase half empty or half full fairly describes the Pakistan Stock Exchange (PSX). Tuesday’s session could be summed up as when the benchmark KSE 100 index further dropped 170.22 points or bounced back 920 points.  With analysts calling the market to have entered the bear market zone following a 20 per cent fall from its peak, investors must have rejoiced the sight of the bounce back.

The KMI 30 index declined 512.51 points pulled down by the cement stocks while the KSE All Share Index laid off 125.58 points. The advancer to decliner ratio stood at 97 to 243.

The market volumes jumped up to 217.01 million from 153.16 million of the previous session. Azgard Nine Limited (ANL -6.18 per cent) dominated the volume chart for yet another session. A total of 15.22 million shares were exchanged in the script followed by Aisha Steel Mills Limited (ASL -2.37 per cent) 14.18 million.

The cable and electrical goods sector along with the cement sector crumbled. The sector’s cumulative market capitalisation depreciated by 4.67 per cent and 3.42 per cent respectively. Bestway Cement Limited (BWCL -5.00 per cent), D. G. Khan Cement Company Limited (DGKC -4.83 per cent), Attock Cement (Pakistan) Limited (ACPL -5.00 per cent) and Thatta Cement Company Limited (THCCL -4.99 per cent) were amongst those who took a dip to the floor price.