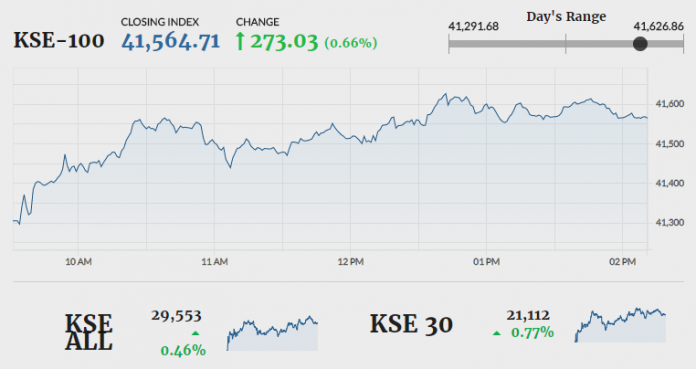 LAHORE: Pakistan Stock Exchange (PSX) suspended trading at counters due to a technical fault. Although volumes were thin but during the shortened trading session indices enjoyed settling in the green. Sentiments were high and the KSE 100 index touched intraday high of 41,626.86 with 335.18 point gain before settling at 41,564.71, up by 335.18 points compared to the previous trading session.

Sales for the quarter amounted to Rs 4.24 billion against Rs 2.54 billion of the same period last year. This helped post-tax profit of Rs 309 million which is a frog leap from 1QFY17, profit after taxation Rs 85 million. Earnings per share stood at Rs 0.37.

MCB Bank Limited (MCB +0.88 per cent) expanded its markup earned by 5 per cent compared to the last quarter. The bank’s net profit declined 28 per cent due to a 21 per cent increase in operating costs. Per share earnings stood at Rs 4.66 for the period with a cash dividend of Rs 4.00.

Along with the financials, the BoD also approved the scheme for de-merger of business and operations of 90 branches, which shall be merged with and into MCB Islamic Bank Limited, subject to shareholder and regulatory approvals. We believe these to be the branches acquired during the NIB amalgamation.

Packages Limited (PKGS +0.75 per cent) announced a 56 per cent contraction in quarter-on-quarter profits. Earnings per share fell to Rs 7.94. The board also resolved to further acquire up to 22.50 per cent shares of Flexible Packages Converters Limited. A company engaged in the manufacturing of flexible packaging material.

Overall the day brought some relief to investors however some showed concerns over the said technical glitch.

“The technical fault occurred in the trading and exposure management system at 2:10 pm,” a reliable source told Pakistan Today and since that time it could not be reopened till 5 pm.

Since PSX circulated a memo which informed all the TRE Certificate holders of the Exchange of the temporary suspension of trading on the platform.

It is mention worthy that the PSX recently hired a highly paid technical team to maintain the smooth operation of the stock market.