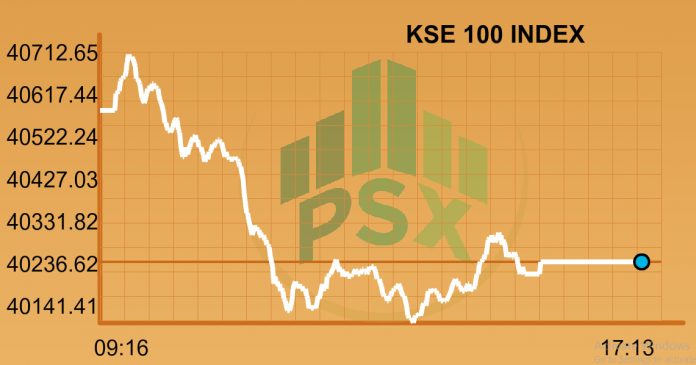 LAHORE: KSE-100 index fell 0.8 per cent or 326 points as Pakistan’s embattled Finance Minister Ishaq Dar took a medical leave of absence, while his responsibilities will be handed over to a team of economic advisors led by the incumbent Prime Minister.

Further, IPP’s, OMC’s and refineries were under the gun as participants were concerned over looming furnace oil glut given plant closures. While gains in oil prices, holding near $ 58/bbl, highest in 2 years as US EIA drawdown beat expectations, failed to spur interest in E&Ps.

The market volumes followed suit with a previous couple of weeks as they clocked at 101.84 million for the day. K-Electric (KEL; -3.57 per cent) dominated the volumes with over 9 million shares exchanging hands, however, shed 21 paise as investors looked to book gains after Wednesday’s 10 per cent surge. ATRL (-5 per cent) wiped the floor on low utilisation news, while HUBC shed 2.9 per cent as it’s CEO commented that plant is running low.

TPL Tracker Limited (TPL; +14.14 per cent) ranked second on the chart with a volume of 7.65 million shares hitting the upper circuit breaker, followed by Worldcall Telecom (WTL; -0.66 per cent) at 7.48 million shares.

Overall food and personal care sector lead the decline going south by -2.69 per cent followed by power generation and distribution which was down by -2.63 per cent.

In major news, Pakistan borrowed another $ 500 million from the Industrial and Commercial Bank of China (ICBC) reportedly to protect the foreign reserves from falling below dangerous levels. During the first four months (July-October) of this fiscal year, Pakistan obtained new loans amounting to $ 2.3 billion and an overwhelming majority of them are meant for filling the massive budget deficit gap and building foreign currency reserves.

On the political front, the federal government laid to rest weeks of speculation regarding future of Pakistan’s Finance Minister Ishaq Dar, who was absent from the country citing health issues. The government notified that Dar has taken a leave of absence from the duties as finance minister and that his portfolio would be looked after the Prime Minister until a replacement is found.