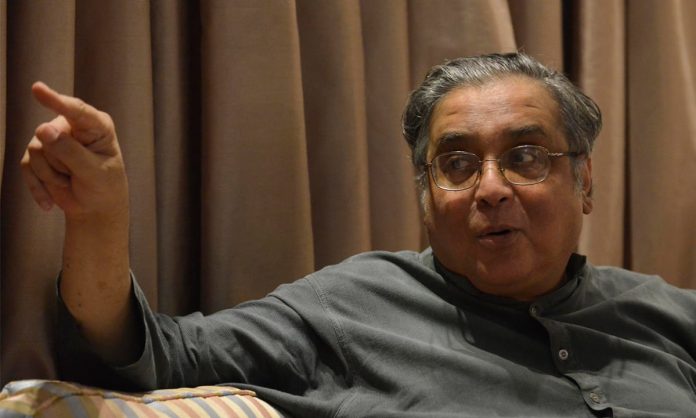 KARACHI: Noted economist Dr Hafiz Pasha said on Saturday that the gap between the rich and the poor has widened by one-third in the last few years.

Speaking at the launch of three economy-related books at the Karachi Literature Festival (KLF), Pasha said the gap between the two classes has substantially gone up in the last 15 years and now stands at 12 to one.

Sharing his research outcomes that constitute the first volume of his latest book on low growth and rising inequality, he said the two major factors that constrained growth in the last 15 years were the war on terror and electricity shortages.

Using a new methodology to estimate the direct and indirect cost of the war on terror, Pasha estimated the cost at $ 180 billion, adding that it is ‘much higher’ than the figure of $ 123 billion reported by the government.

“It is costing Pakistan $ 11-12 billion a year,” he said, noting that the cost is 5.5 times higher than the financial support received from the United States.

Based on a scientific survey of 1,000 industrial, commercial, agricultural and domestic users, Pasha said the annual cost of load-shedding for 2015-16 was Rs 1.575 trillion. “It is a tragedy because this could have been avoided altogether,” he said, adding that exports amounting to $ 3.5 billion were affected and over a million jobs were lost as a result of power shortages.

As for employment generation, he said the economy has been adding up to 700,000 jobs every year as opposed to 1.5-1.7 million people that join the workforce annually. “We are adding less than 50 per cent of the number of jobs that are required to absorb new entrants annually,” he said.

According to his research, the level of unemployment in the ‘educated’ workforce is three times higher than the national level. “One in every six graduates is unemployed,” he said, adding that 4 million male youths are sitting ‘idle’.

His team also conducted an exercise to estimate the growth rates of provincial economies. Despite the impact of the war on terror, Khyber-Pakhtunkhwa is the fastest-growing provincial economy in the country. This is partly because its residents receive 30-35 per cent of total foreign and domestic remittances, he said. Its growth rate has steadily been above 5 per cent for the last 16 years as opposed to the national average of 4.5 per cent.

Speaking on the occasion, Sustainable Development Policy Institute Deputy Executive Director Dr Vaqar Ahmed highlighted the missing link between fiscal and trade policies. Referring to the ‘anti-export bias’ of the fiscal policy, he said manufacturing enterprises have to pay 56 kinds of taxes and comply with 13 separate institutions to operate in Pakistan. “The regulatory burden is too heavy,” he said.

At the launch of his book in a separate session, State Bank of Pakistan former governor Dr Ishrat Husain said too many myths exist about the economy in the minds of the general public. His latest work titled Governing the Ungovernable busts those myths by using empirical evidence.

Dr Ishrat said that for example, the general perception is that poor economic growth is a direct result of the fact that Pakistan is a fragile state ravaged by frequent acts of terrorism. However, Husain refutes this view by asserting that terrorism is a post-2001 phenomenon. “The rot started around 1990 when there was no terrorism,” he said, adding that the country recorded growth rates of 6.5-7 per cent in 2002-07 despite frequent acts of terrorism.

He also refuted the generally held views about the hyped role of foreign assistance flows, US support for military dictators, the adverse impact of global politics and overemphasis on the garrison-state narrative by using official statistics.

He called on policymakers to bring reforms in 24 key institutions of national importance to create ‘islands of excellence’, which will then have a spillover effect on the rest of the economy.