Miftah says highest growth rate of 5.79 per cent achieved in 13 years. Ahsan says all promises made by his party in its manifesto fulfilled. 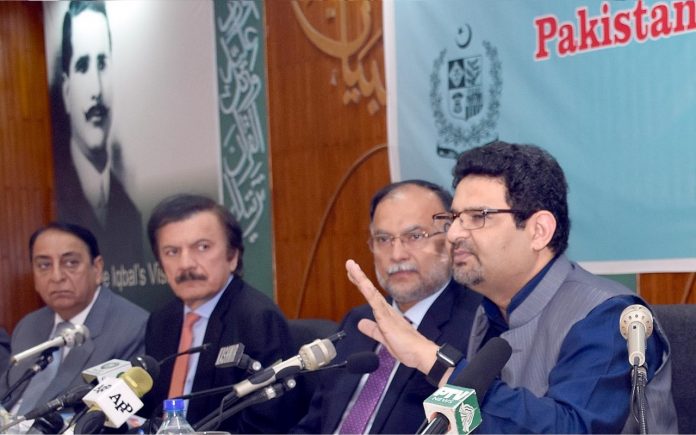 ISLAMABAD: As the elections draw near, the federal government has pinned the failure to achieve economic growth targets to the political uncertainty in the country during the past one year, with Adviser to Prime Minister on Finance and Revenue Miftah Ismail saying that the government could have exceeded the 6 per cent growth target had it not been disturbed politically.

Addressing a press conference held for the launch of economic survey for the outgoing fiscal year (2017-18) here on Thursday, he said that the government had projected the growth rate to be 6.1 per cent in the financial year 2017-18.

Miftah, while sharing the performance of his government, said that Pakistan had achieved the highest growth rate [of 5.79 percent] in the past thirteen years. The growth momentum had remained above 5 per cent for the last two years in a row and reached 5.79 per cent in the fiscal year 2018 on account of a strong performance in agriculture, industry and services sectors, which grew by 3.81 per cent, 5.8 per cent, and 6.43 per cent respectively, he said.

Counting the feats of his government, the de-facto finance minister said that they had achieved highest agriculture growth rate of 3.81 per cent in 13 years, highest industrial sector growth of 5.8 per cent in 10 years and highest recorded manufacturing growth of 6.24 per cent in 11 years. The services sector also recorded 6.43 per cent growth and the inflation rate was brought down to 3.8 per cent, he added.

Interestingly, the adviser to the prime minister missed the major concerning element of the economy – the current account deficit – during his presentation. However, replying to a query, he said that since he has admitted that the decline in exports occurred during the first three years of this government against the increasing imports, the trade deficit was much obvious, thereby resulting in current account deficits.

He also gave a contradictory figure relating to the ratio of public debt against GDP saying that the net public debt to GDP was recorded at 60.2 per cent, which could reach to 61.4 per cent by the end of the current financial year. His numbers were questioned during the press conference since the government has officially informed parliamentary committees about debt to GDP ratio standing at 70 per cent.

The adviser also said that the total public debt stood at Rs22, 820 billion at the end of December 2017, while the total debt of the government was Rs20, 878 billion. The total public debt recorded an increase of Rs1, 413 billion during first six months of the current fiscal year, he added.

Justifying the decision to announce a full-year budget for six times, Miftah said that the governments need to continue paying salaries and finance on-going projects. “Expenditure allocations take place for a 12-month period. You cannot announce a budget for three or four months,” he said, adding that the provinces have to present a budget that is based on their expenditures and they are given revenues which mostly come from the federal government.

“You will see that all provinces will give their budget too, even though they are busy playing politics on the matter at the moment,” Miftah added.

“For the next government, we have fixed block allocation of Rs100 billion to spend on development as they please. If it wants, the new government can make changes in the budget as well,” he said while replying to a query.

On devaluation of rupee against dollar and subsequent criticism by former finance minister Ishaq Dar, he said that it was his [Dar’s] understanding to let the currency have that place. “Dar might be talking about his views and understanding,” he said.

Addressing the press conference before Miftah, Ahsan Iqbal claimed that the government, while announcing the 6th budget, was pleased to inform that all the promises made by his party in its manifesto were fulfilled.

He said that the four major challenges including electricity shortage, law and order situation, poor economy and education system were daunting tasks faced by the government when it came to power in 2013.“By the grace of Allah, we have bravely faced these challenges, bringing historic improvements in these areas,” he said.

The planning minister further said that the growth rate figures were endorsed by the World Bank and other international organisations.

To meet the energy crisis, at least 35 projects with cumulative capacity of 12,230 Megawatts have been added in the system during the past five years, Ahsan said, adding that the “energy, economy, elimination of extremism and education were the ‘four Es’ that we had discussed in our manifesto.”

“We created two plans ─ one was an immediate plan, the other was Vision 2025,” he explained. The government had, over the last five years, allocated Rs47 billion to higher education, built 1,750 kilometres of roads and added over 11,000 Megawatts to the national grid, the planning minister informed.

“The CPEC is a reality today. Of a total investment of $46bn, $39bn is being used to build roads and infrastructure. We have used our own budget to curb terrorism, financing Operations Zarb-e-Azb and Raddul Fasaad from our own pocket,” he said.