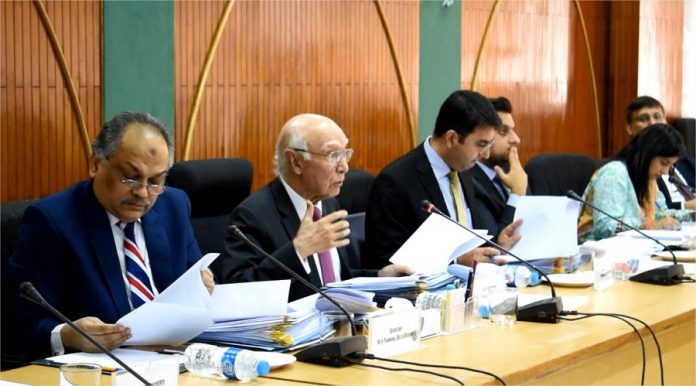 ISLAMABAD: As the government approaches the end of its tenure in the next 4 weeks, Central Development Working Party (CDWP) under the chairmanship of Planning Commission Deputy Chairman Sartaj Aziz on Wednesday approved 31 projects worth Rs713 billion and referred 8 projects worth Rs694.88 billion were referred to ECNEC for further action.

The meeting was attended by senior officials from the federal and provincial governments along with Planning, Development and Reform Secretary Shoaib Ahmad Siddiqui. Meanwhile, projects from the energy sector, water resources, transport and communication, education, health, manpower, food and agriculture, physical planning and housing, information technology, science and technology and mass media were presented to the panel for approval.

The CDWP approved a Rs424.42 million expansion and up-gradation project of the Pakistan Petroleum Core House for its sustainable operations to facilitate oil and gas research in Pakistan. Moreover the working party referred the Neelum-Jhelum Hydroelectric project with an estimated cost of Rs500.34 million, 220 KV Jauharabad Substation projects worth Rs3147.12 million and the evacuation of power from 2160MW Dasu Hydro Power project (Stage-I) with an estimated cost of Rs75,859.63 million were referred to Executive Committee of National Economic Council (ECNEC) for further proceeding.

Meanwhile, under transport and communication projects presented to the CDWP, it only approved the development scheme in district Mansehra with an estimated cost of Rs1020.5 million and construction of roads in east Karachi and district Malir worth Rs499.81.

It, however, referred the construction of Lahore-Sialkot Motorway (LSM) link highway (4-Lane) connecting LSM to Narang Mandi and Narowal Eastern Bypass (73 km) with an estimated cost of Rs19.99 billion along with 184 km Faisalabad-Khanewal Motorway (M-4) project worth Rs60.82 million to ECNEC for further proceeding.

Under the education section, 5 projects were presented out of which 1 project (Balochistan Education Support) worth Rs11.80 billion was referred to ECNEC.

A project for the establishment of regional blood centres at Faisalabad and up gradation of existing blood units in Lahore worth Rs303.26 million was approved.

A special project for development of health services in Afghanistan which includes 60 beds kidney hospital in Jalalabad, 200 beds Jinnah Hospital in Kabul and 100 beds hospital in Logar at the cost of Rs2.01 billion was also approved.

Other projects approved by CDWP include the establishment of safe blood transfusion services in Gilgit Baltistan, Sindh and Balochistan.

In food and agriculture section 2 projects of worth Rs3.3 billion were presented and approved by the CDWP. The projects include “National Pesticide Residues Monitoring System in Pakistan” at the cost of Rs799.3 million and “National Cotton Research and Development Programme” at a cost of Rs2.5 billion.

In informational technology section, only one project for the “up gradation of monitoring system up to 250 TV Channel PEMRA” was approved by the CDWP at an estimated cost of Rs196.73 million.

Under the science and technology section, 6 projects were presented out of which 3 projects were approved by the CDWP. The approved projects include “up gradation of medicinal botanic centre at National Centre for herbal medicine” at a cost of Rs136 million, “establishment of Muslim Bagh campus at Balochistan University of Information Technology, Engineering and Medical Sciences” at a cost of Rs1.55 billion, and “up-gradation of lab equipment of NUST Schools and Colleges” at the cost of Rs462 million.

Lastly, under the mass media section, only one project titled “PTV Terrestrial Digital DTMB Demonstration Project” at a cost of Rs.2.79 billion was approved by CDWP.