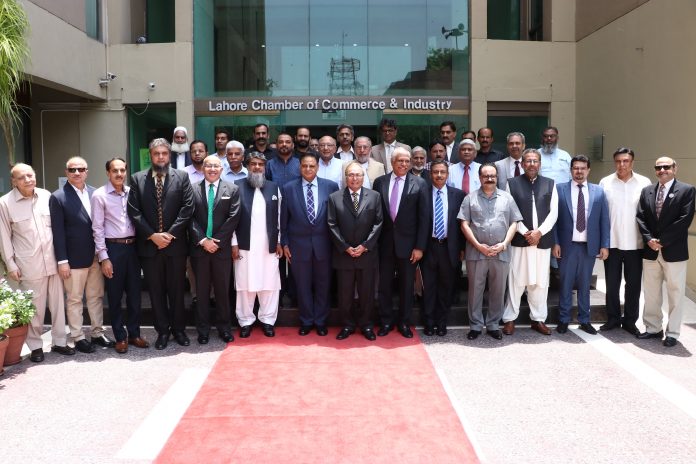 LAHORE: In a rare interaction with the private sector, the Punjab Cabinet on Tuesday expressed the resolve to work hand in hand with the business community to ensure economic growth.

Provincial Caretaker Minister for Finance Syed Zia Haider Rizvi said that trade and industry are the major areas of focus for the Punjab government. He said that a mechanism has been evolved to run the affairs smoothly. He said that Federal government has been asked to give a share to Punjab in taxes on petroleum and other goods that are being consumed in this province. “We are doing what we can to resolve the issues of the businessmen of Punjab as they are the backbone of the economy”, Syed Zia Haider Rizvi said and added that harassment to the business community is not acceptable. He said that caretaker government of Punjab wants to develop a roadmap for the upcoming government.

The LCCI President Malik Tahir Javaid termed the visit of Punjab Cabinet to the Lahore Chamber of Commerce and Industry a historic moment and best example of the public-private partnership. He said that Punjab is considered the linchpin of Pakistan’s economy and it has the highest contribution to the Gross Domestic Product (GDP) of the country. The economic growth of Pakistan heavily depends on the economic performance of Punjab.

He said that the Election Commission of Pakistan (ECP) bars the caretaker Government from taking any major policy decisions but the current system does give the caretaker Ministers some room to lay out important guidelines for the future Governments in terms of making the public sector processes more efficient and business friendly. He said that issues of double taxation, misuse of discretionary powers, lack of pro-business attitude or harassment, weak implementation of policies, lengthy procedures, delaying tactics, encroachment, and parking issues etc should be resolved at the earliest.

On demand of the LCCI President, Provincial Cabinet agreed to establish the Lahore Development Authority (LDA) Facilitation Desk at the Lahore Chamber of Commerce and Industry.

Mian Anjum Nisar said that although the caretaker government is for a limited time but is playing the role of facilitating the business community. He said that the issues of LESCO, unscheduled load shedding, low gas pressure, establishment of new industrial estates and cost of doing business have been raised. He said that stakeholders must be taken on board in policy formation while trust building of local investors is need of the hour. He said that LDA related issues should be resolved and industrial areas should not be sacrificed to the residential colonies. He also called for the early settlement of refunds.

Mian Nauman Kabir said that 7 to 8 thousands pending cases of social security would be resolved through the formation of the Alternate Dispute Resolution Committee. Strategy is hence being formulated regarding parking plazas. He said that 90 per cent poultry products and around 60 per cent meat is being produced in Punjab. He invited the private sector to invest in the livestock sector.

Interior Minister Shaukat Javed said that good law and order situation is a must for economic development of any country. Punjab government is taking all possible measures in this regard.

Saeedullah Baber said that LDA, WASA and PHA related issues of business community must be resolved at the earliest and business community should not be facing cumbersome procedures. He also suggested the formation of a body to tackle these issues on priority.

Chaudhry Faisal Mushtaq called for good policies for social welfare and Baitul Maal. He said that protection of human rights is also important for the economy as it is the demand of the EU GSP Plus Scheme. He said that organisations working in the social sector are being encouraged.