‘Agriculture in Europe to decline as Asian output grows’ 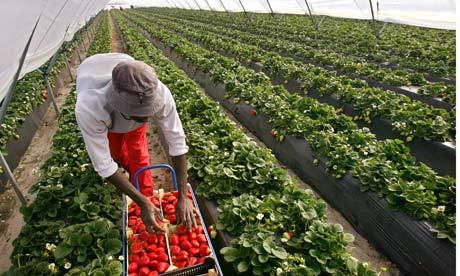 PARIS: Agricultural production in Western Europe is set to decline over the coming decade, with output in Africa and Asia expected to increase, the OECD and the UN Food and Agricul­ture Organisation said in a report on Tuesday.

The unrest-wracked Middle East meanwhile faces a rising threat of food insecurity, the report said, as conflict, climate change, and poor policy all have the effect of keeping the region overly reliant on imports.

“Over the coming decade, the expansion of agricultural production will be disproportionately concentrated in the developing world,” the Organisation for Economic Cooperation and Development and the FAO said in their joint report.

“Overall, the output will expand less in developed economies, notably in Western Europe, where agricultural and fish production is only projected to grow by around 3 percent over the outlook period,” the report added.

In sub-Saharan Africa, crop production is set to expand by 30pc, with meat and dairy both set to grow by 25pc.

South and East Asia – which includes China and India – are the world’s biggest producers of a wide array of agricultural products.

Growth in output will remain high in the region, the report said.

“The coming decade is likely to add new challenges, in particular, the need to reconcile high output levels with increasingly stringent standards for sustainable production,” it said.

“Nonetheless, the region is expected to expand agricultural and fish production by 17pc over the outlook period.”

The Middle East, which is mired in conflict and political unrest, has a “high and growing dependence” on imports for key food products, the report said, leaving the region in a state of increasing food insecurity.

Arable land and water are growing more scarce in the region, both because of climate change pushing temperatures up, and as a result of poor agricultural policy from governments.

“It is difficult to overestimate the importance of the water issue in the Middle East and North Africa region,” the report said.

“Along with conflict, it is the most profound man-made threat to the region’s future,” it added.

But central governments appear to be failing to adapt to the threat, as they continue to encourage the production and consumption of water-thirsty cereals.

“An alternative approach to food security would reorient policies towards rural development, poverty reduction, and support for the production of higher-value horticulture products,” the report said.