Sale of cigarette packets with no pictorial health warning (PHW), or with a PHW less than 50 per cent in size is punishable by law. 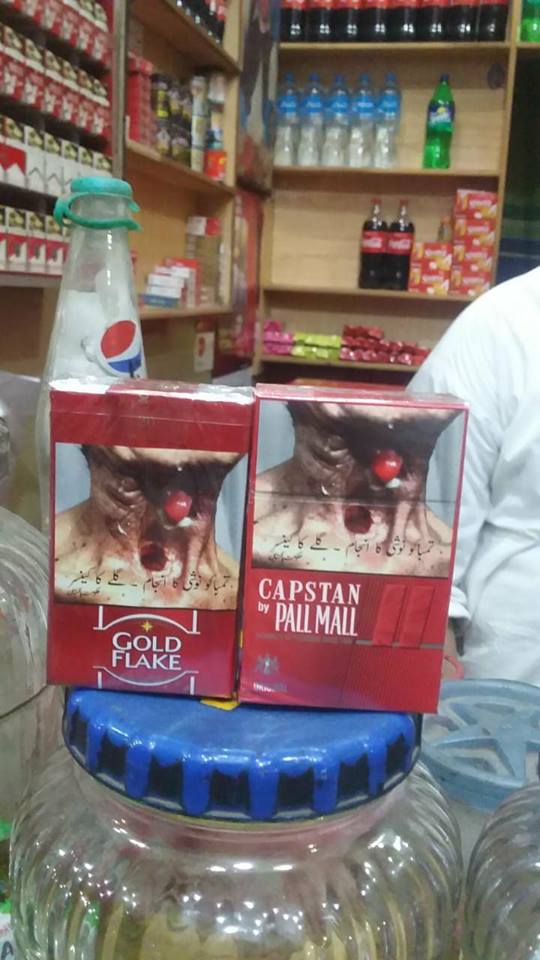 ISLAMABAD: Taking a strong exception to the availability of cigarette packets with no Pictorial Health Warning (PHW) or having PHW less than 50 per cent  of the total size of a cigarette pack in the market, the Ministry of National Health Services, Regulations and Coordination directed the concerned authorities to launch a crackdown/legal action against the violators.

Though the violators of Section-4 shall be punishable with imprisonment for up to two years or with a fine of up to Rs10,000 or with both, the sale of cigarette packets with no PHW or having PHW less than 50 per cent size continue unabatedly in the country due to the non-execution of the said section. Magistrate of the first class shall try any offence punishable under this Ordinance upon complaint made in writing by a police officer (ASI or above)/an Excise Officer (SI or above).

In this regard, the minister wrote letters to the Inspector General of Police (IGP) of four federating units and the Islamabad Capital Territory (ICT) administration to ensure the enforcement of notifications of PHW on cigarette packets and outers in letter and spirit.

The letter, a copy of which is available with Pakistan Today, reads that in continuation of this Ministry’s letter dated June 11, 2018, it is stated that the Ministry of National Health Services, Regulations and Coordination vide SROs 127(KE)/2017 and 128(KE)/2017 dated December 19, 2017 has prescribed the new Pictorial Health Warning (PHW) on cigarette packets and outers.

Moreover, the letter reads that according to Section 8A(b) of SRO 22(KE)/2015 dated January 29, 2015, no design features of cigarette packs shall contribute towards reducing the effectiveness of the Health warning in any manner.

“Section 8A(c) obligates that no messages shall be printed that directly or indirectly promote a specific cigarette brand or cigarette usage on the packet,” the letter reads.

However, currently, the Ministry has noticed violations of above-said notifications.

Cigarette packets with no PHW or having PHW less than 50 per cent size are available in the market.

It has also been observed that some companies have printed PHW with distorted color scheme (Annex-IV) along with the printing of promotional messages which is a clear violation of SRO 22(KE)/2015 dated 29 January, 2015.

According to Section-4 of Cigarettes (Printing of Warning) Ordinance, 1979, no person shall manufacture packets of cigarettes, possess or sell or offer for sale packets of Cigarettes, on which the warning is not printed as prescribed by the government.

The minister stated that directions should be issued to the relevant authorities to launch crackdown/legal action against the violators of aforementioned notifications/Laws.

Hamid Khan Wazir
The writer is a member of Pakistan Today's Islamabad bureau. He can be reached at [email protected]