Perhaps one of the most optimistic targets that Pakistan Tehreek-e-Insaf (PTI) set for itself when it launched its 100-day plan before the July 25 elections pertained to the housing sector. While only 4.9 million houses have been built in the first 71 years of Pakistan’s existence, the current government plans to build 5 million in the next 5 years, a task that seems doable to some and impossible to others.

It is not as though the proposal is not a worthy goal. Pakistan does have a severe housing shortage. The 2017 census numbers suggest that Pakistan’s population has reached 207 million, growing at an average of 2.4% annually since 1998.

“It is estimated that annual demand for new homes is approximately 700,000 a year, whereas, only about half of this demand is met. Overall, the housing deficit is estimated at 10 million units and growing,” states a report published by the State Bank of Pakistan (SBP). However, the problem is not the shortage of houses altogether, but shortage of houses at affordable rates.

Housing in the Pakistani context seems to have more to do with pricing then just a simple demand and supply gap. For example, you can easily go and buy a house worth Rs10 million, if you have the finances to do so and there is an ample supply of houses in this segment. The real problem is that not a lot of people have such buying power and for them, there are few cheaper alternatives.

According to the State Bank of Pakistan, a low-cost housing includes property valuing up to Rs2.5 million. The gap between demand and supply widens as one moves towards low-cost housing and the government, with the Naya Pakistan Housing Scheme is looking to fill this void.

However, the government doesn’t plan to do this completely by itself. Rather it wants to play the role of a facilitator, while the private sector invests and builds houses. For this purpose, it plans to create a land bank register and a one window facility, to ascertain where government-owned lands exist and to bring all kinds of permission and facilitations related to the project under one roof.

No room for misconceptions

According to the figures quoted on the media by government representatives, the total cost of the project is $180 billion which is equal to almost 60% of Pakistan’s GDP and the banks which are supposed to finance the major part of this scheme currently lack the liquidity to do so. As of June 2018, the entire Pakistani banking sector has Rs12.7 trillion ($95 billion) in deposits.

However, Shandana Gulzar Khan, the Parliamentary Secretary for Commerce disagrees with the cost figure. “The $180 billion figure comes from a non-government source, a real estate developer from the UK. PTI has never officially or unofficially floated that figure or worked on it,” she says.

“The working on the Rs1.5 to 2.5 million per house price is also grossly misquoted and overstated. The only correct benchmark is that the government can only contribute one thing, which is land for the housing.”

Jawad Aslam, CEO of Ansar Management Company, a real estate company that is working on low-cost housing projects in Pakistan in a private capacity, has attended two meetings of the government’s task force on housing. He also confirms that neither the $180 billion figure has ever come up in those meetings, nor the Rs1.5 to 2.5 million cost per house that is being discussed in the media.

On the other hand, Hassan Bakshi, the chairman of the Association of Builders and Developers (ABAD), feels that the actual cost of the project will be much lower. “The total cost of the project will at most be around $40-$50 billion according to our estimates,” he says. But he insists that the per house cost has to be lower than Rs2.5 million as only properties valuing up to Rs2.5 million come under low-cost housing as defined by the SBP.

The $180 billion valuation he says came from the UK-based real estate developer Aneel Mussarat, who had estimated the price of a house at as high as $100,000. Profit tried to reach out to the property tycoon but received no response. 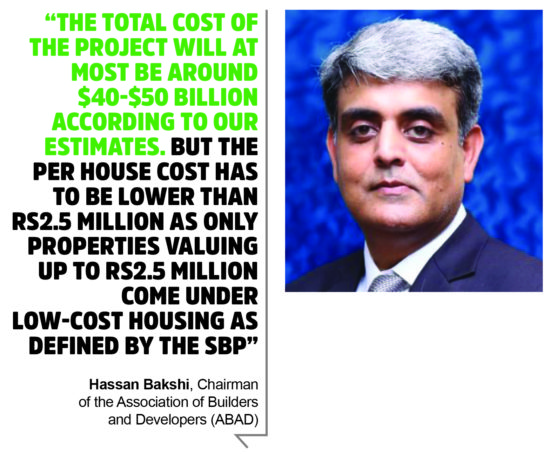 “Forty percent of the project is to be undertaken in rural areas, where the cost will be as low as Rs250,000 to Rs300,000 per house,’ Hassan says. How? He explains that according to the international definition, a house consists of at least two rooms, a washroom and a kitchen. Most buildings in rural areas lack such infrastructure and currently are not considered a house under the definition. According to him, if owners of such building in rural areas are given loans, they can add to the existing infrastructure and fall under the homeowner category.

As far as the financing of the project goes, the government’s plan is simple. It wants to curtail revenue leakages, encourage the private sector to invest, and encourage commercial banks to increase their mortgage financing portfolio.

“International organisations are being brought into the country to help the government look for the most sustainable path to recovery of the stolen taxpayer money,” says Shandana Gulzar Khan.

However, the most important aspect of financing the government is focusing on is the mortgage business. According to the World Bank figures, the ratio of housing debt to GDP stands at 0.5%, compared to 3% in Bangladesh, 7.5% in Sri Lanka, 7.7% in India, 40.9% in Germany and 63% in the United States (US).

Nevertheless, the low housing debt to GDP ratio in Pakistan is not without reason. Internationally mortgage interest rates fall under the 4% to 5% range. However, SBP’s current discount rate of over 8% would mean that consumers will have to pay a mortgage rate of over 10%, making mortgages an expensive option. However, according to SBP’s report on policy for promotion of low-cost housing finance, “the central bank is to introduce a subsidised financing facility for low-cost housing by providing liquidity to the financial institutions at subsidized rates. SBP will provide refinance up to Rs1 million or 50 per cent of the loan amount at a rate of 1 per cent to banks and Development Finance Institutions (DFIs) and the end borrower rate will be 5 per cent. The remaining 50 per cent of the loan financing amount shall be provided by the banks and DFIs from their own sources at a fixed rate of up to 12% or variable rate of 1-year KIBOR plus risk premium of up to 4%.”

According to Hassan Bakhshi, if the central bank is successful in implementing this policy, the combined mortgage rate will come down to around 8 per cent. “What we are saying is that if you are paying Rs10,000 in rent per month, you can pay a little extra and own the house you live in after 20 years,’ he says. However, the proposition is not that simple and there is still some thinking that the government needs to do. Rental yields in Pakistan are around 3 per cent and it can cost around Rs6,000 to rent a house worth Rs2.5 million. A person living on Rs15,000 to Rs20,000 can bear this amount, but not many individuals falling under this income bracket will be willing to pay an amount in excess of Rs10,000. However, Syed Firdous Shamim Naqvi, the opposition leader in the Sindh Assembly and PTI’s spokesperson on commerce and industry, informs that the government is looking into increasing the term duration and the down payment on the mortgages, both of which will help bring the monthly mortgage payments close to the monthly rental payments that people currently make.

On the other hand, there are no proper foreclosure laws to protect banks against defaulting customers. In 2001, the Financial Institutions (Recovery of Finances) Ordinance (FIRO) was introduced to empower financial institution to foreclose the property of a defaulter without the intervention of the court. However, the same was declared as ultra-vires to the constitution of Pakistan in 2013. The SBP has proposed amendments in the ordinance and is currently facilitating in drafting rules which will help streamline the foreclosure process for financial institutions. If this is done properly, it will help remove one of the biggest deterrents for to mortgage financing in Pakistan.

Jawad Aslam is the Chief Executive Officer at the Ansaar Management Company, an organisation working on providing low-cost housing in Pakistan.  The company is funded by two foreign investors, Places for people based in the UK and Reall, based in Scotland. Currently, AMC is providing, 953-square-foot houses that cost Rs1.2 million. Having attended meetings of the government’s task force on housing Jawad is fairly positive about the government’s intentions regarding the housing issue. However, he still feels that it will be a challenge for the government to bring the private sector on board.

“The return on investment (ROI) for real estate developers fall in the range of 200% to 300%, whereas in the low-cost housing segment, ROI is as low as 15%. Why would people invest in low-cost housing if they can get a higher ROI otherwise?” he asks. Jawad feels that the government needs to make some calibrations and provide a conducive ecosystem to attract the private sector to invest into low-cost housing. 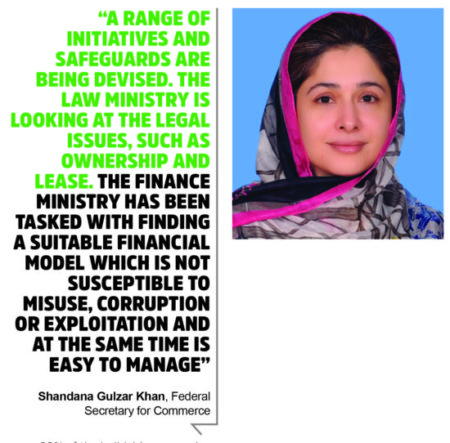 “A range of initiatives and safeguards are being devised. The Law Ministry is looking at the legal issues, such as ownership and lease. The Finance Ministry has been tasked with finding a suitable financial model which is not susceptible to misuse, corruption or exploitation and at the same time is easy to manage,” assures Shandana Gulzar Khan, the federal secretary for commerce.

Perhaps AMC’s model can help potential private investors to increase their returns. The company builds houses on 60% of the buildable area and sells them at cost, on the condition that the buyer moves into the house within 60 days, and cannot sell it, rent it or leave it empty for a period of 4 years to avoid it becoming a ghost housing scheme. The rest of the 40% of the buildable area is sold as plots on premium market rates. These plots, unlike the houses, don’t have any conditions attached and deliver a major part of AMC’s returns.

However, according to Jawad, the target of five million houses is a bit too optimistic. “Five million houses cannot happen. But it doesn’t matter. What needs to happen is accessibility to housing for all. People should be able to find a development that is equal to their socio-economic status and should be able to have financing available to buy a house there. PTI might not be able to achieve even one million houses in the next five years, but if that motion is set in place, with proper planning then the housing problem will not exist anymore.”

Hassan Bakshi, the Chairman of ABAD also stresses the need for government facilitation. “As builders, we need a one window approval process, we need clear titles of land and we need an assurance that once this scheme is launched our allied manufacturers and suppliers will not increase their prices,” he demands. As a case in hand, prices in the cement industry in Pakistan that is marred by cartelisation are unreasonably high. 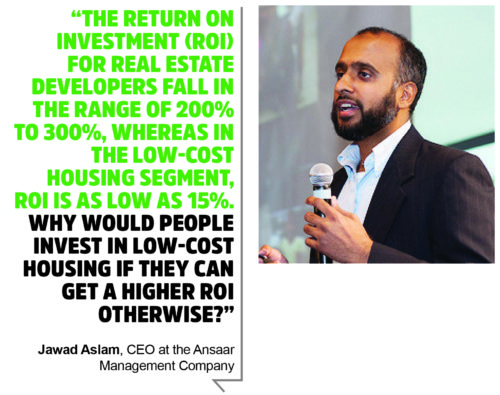 Secondly, zoning laws limit the construction of high-rise buildings and Hassan stresses the need for taking the judiciary on board. “The scheme cannot be a success if the judiciary is not on the same page. We have to realise that this scheme is for our own economic benefit. If we keep putting bans on construction, the scheme will not work,” he says.

“We have the demand, labour and land needed for the project. We have to increase our capacity and arrange finance,” he explains concluding that the 5 million number is challenging but achievable.